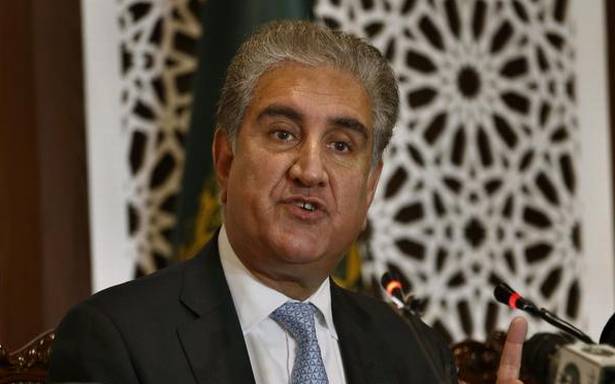 Speaking to Ustad Mohammad Karim Khalili, the Leader of the Hezb-e-Wahdat-e Islami, Afghanistan, Mr. Qureshi said all sides should take measures for reduction in violence in the country.

Pakistan Foreign Minister Shah Mahmood Qureshi on Tuesday said that Islamabad would continue to support the peace process in Afghanistan, urging the Afghan leadership to seize this historic opportunity to establish lasting peace in the country.

Speaking to Ustad Mohammad Karim Khalili, the Leader of the Hezb-e-Wahdat-e Islami, Afghanistan, who met him along with his (Khalili) delegation, Mr. Qureshi said all sides should take measures for reduction in violence in the country.

Pakistan’s Foreign Office said that during the meeting, views were exchanged on Pakistan-Afghanistan relations and progress in the Afghan peace process.

The Foreign Minister reiterated Pakistan’s consistent support for a peaceful, stable and prosperous Afghanistan. He also reaffirmed that Pakistan will continue to facilitate the Afghan peace process.

During the meeting, Mr. Qureshi stressed that the Afghan leadership should seize this historic opportunity to establish lasting peace in Afghanistan through the Intra-Afghan Negotiations.

He urged on all sides to take measures for reduction in violence leading to ceasefire. He also cautioned against the role of ‘spoilers’ within and outside Afghanistan, who did not wish to see the return of peace in Afghanistan and the region.

He also underscored that after the Afghans, Pakistan was the country most desirous of peace in Afghanistan. He reaffirmed Pakistan’s commitment to strengthening bilateral relations with Afghanistan in all fields.

Mr. Qureshi said Pakistan had always emphasised that there was no military solution to the Afghan conflict and that a negotiated political settlement was the only way forward.

Mr. Khalili thanked for Pakistan’s consistent support to Afghanistan, particularly in the peace process and for hosting millions of Afghan refugees for the last many decades. He appreciated the various steps taken by Pakistan to strengthen trade between the two countries and facilitate Afghan nationals through revised visa policy.

The Afghan government and the Taliban representatives in December last year said they had reached a preliminary deal to press on with peace talks, their first written agreement in 19 years of war.

Pakistan has urged both the sides to remain constructively engaged and show flexibility in the negotiations for reaching an inclusive, broad-based and comprehensive political settlement which would lead to a lasting peace and stability in Afghanistan.