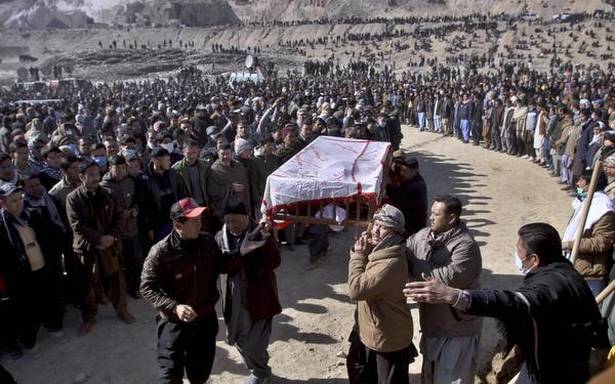 Protesters staged a sit-in after the Islamic State group captured and shot the miners last Sunday in Machh, an area some 30 miles east of Quetta

Hundreds of Pakistani Shiites gathered on Saturday to bury 11 coal miners from the minority Hazara community who were killed by the Islamic State group, ending over a week of protests that sought to highlight the minority community’s plight.

Protesters staged a sit-in after the militant group captured and shot the miners last Sunday in Machh, an area some 30 miles east of Quetta, the capital of Pakistan’s troubled Baluchistan province.

Prime Minister Imran Khan arrived Saturday afternoon in Quetta and was expected to meet with a delegation of mourners and Shiite leaders, according to his office. Mr Khan’s visit came after Shiite demonstrators across the country — who blocked roads in major cities — demanded that he visit the grieving minority community in Quetta and assure their protection.

On Friday, Mr Khan appealed to the protesters not to link the burial of the coal miners to his visit to Quetta, vowing that he would visit afterward. Under Islamic tradition, burials take place as quickly as possible after death.

“No premier of any country should be blackmailed like this,” Mr Khan said, in his televised remarks.

Dozens of Shiites rallied Friday night in the capital of Islamabad, denouncing Mr Khan for calling the mourners blackmailers.

The premier sent a group of ministers and top officials to negotiate with the Hazara community, leading the mourners to agree to a funeral.

Violent attacks against Shiite and other religious minority groups remains a problem in Sunni-majority Pakistan.

Before coming to power in 2018, Khan often criticized Pakistan’s leaders for not doing more to stop attacks on the minority Hazara community, and for not rushing to Quetta to offer condolences after similar assaults.

IS militants abducted and then shot and killed the miners on Sunday in Baluchistan. Police video of their bodies revealed the miners had been blindfolded, and their hands tied behind their backs before being shot.

The Sunni IS affiliate promptly claimed responsibility and since then, authorities have been raiding militant hideouts to trace and arrest those who orchestrated the killings, though Mr Khan insists Pakistan’s neighbor India was behind the violence in Baluchistan.