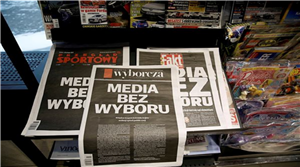 "In our opinion (the tax) may bring many negative effects to Poland's businesses, media and the people," and Agreement "sees no possibility of giving its backing to the law in its current shape," the party said in a statement. A junior partner in Poland’s ruling right-wing coalition says it will not back a controversial advertising tax on the media, revealing cracks in the governing bloc.

The declaration late Friday by the Agreement party means the ruling coalition would be short of votes in parliament to pass the proposed legislation that critics “at home and abroad” say would undermine Poland’s press freedom and variety.

“In our opinion (the tax) may bring many negative effects to Poland’s businesses, media and the people,” and Agreement “sees no possibility of giving its backing to the law in its current shape,” the party said in a statement.

The message reveals disagreements within the conservative coalition of the Law and Justice party and two small parties that has been in power since 2015 and is in its second term.

The government argues that the tax, linked to the size of companies, would level out the chances between big and small media companies and would make communications giants like Google, Facebook, Apple or Amazon pay their fair share.

It says some 800 million zlotys ( USD 215 million) from this “solidarity” tax would bolster state finance badly strained by the coronavirus pandemic and would go toward health care and culture.

Some 45 independent media suspended their coverage for 24 hours Wednesday in protest at the plan, saying it would cause many of them to collapse, while they are already paying corporate tax on advertising and many other dues. Meanwhile, the government has been generously funding state-owned media.

The United States and the European Union on Wednesday stressed their support for media diversity and freedom.

The proposed tax is still in an early consultation stage, but the government would like it to take effect July 1. The coalition has a narrow margin of 234 votes out of 460 in the lower house, or Sejm, but it is short of a majority in the Senate.

The Agreement party said it was ready to work on a tax for media technology corporations on the Polish and European Union markets.