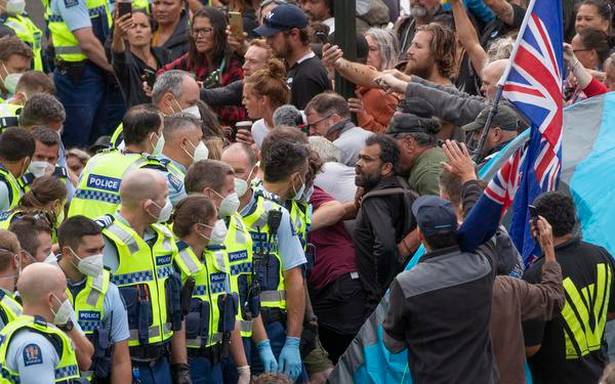 The protest began on February 8 after over 1,000 people driving cars and trucks converged in a convoy inspired by protests in Canada and elsewhere

Police on February 10 began arresting dozens of protesters who were camped out on the grounds of New Zealand’s Parliament on the third day of a convoy protest against coronavirus mandates.

The arrests came after Parliament Speaker Trevor Mallard took the rare step of closing the grounds.

Police called in more than 100 extra officers from other parts of the country. Still, police seemed prepared to wait it out as officers formed a line and ordered people to leave but only very slowly advanced on them.

By noon, police had arrested more than 50 people and had charged many of them with trespassing or obstruction. Police wore protective vests but didn’t don riot gear or carry guns.

Police said they had told everybody on the grounds they were trespassing.

“Police have appealed repeatedly to protestors to leave the grounds and have begun evicting people from the precinct,” said Superintendent Corrie Parnell, the Wellington district commander. “While police acknowledge people’s right to protest, this needs to be conducted in a way that does not unfairly impact on the wider public.”

The protest began February 8 after more than 1,000 people driving cars and trucks converged on Parliament in a convoy inspired by protests in Canada and elsewhere.

The number of protesters had dwindled to a couple of hundred by Thursday. Some of the protesters’ vehicles remained parked in the middle of streets around Parliament, forcing some street closures. The National Library and many cafes and bars in the area closed their doors while the protest played out.

Parliament’s grounds are often the site of peaceful protests, although mass campouts are unusual.

Typically at least some politicians will come out to listen to the concerns of protesters, but politicians reconvening at Parliament after a summer break appeared to be in rare unison by not acknowledging the protesters, who Prime Minister Jacinda Ardern said weren’t representative of New Zealanders.

Among the protesters’ grievances is the requirement in New Zealand that certain workers get vaccinated against COVID-19, including teachers, doctors, nurses, police and military personnel. Many protesters also oppose mask mandates — such as those in stores and among children over about age 8 in classrooms — and champion the ideal of more “freedom.”

New Zealand was spared the worst of the pandemic after it closed its borders and implemented strict lockdowns, limiting the spread of the virus. The nation has reported just 53 virus deaths among its population of 5 million.

But some have grown weary of the restrictions. Ardern last week said the country would end its quarantine requirements for incoming travelers in stages as it reopened its borders. With about 77% of New Zealanders vaccinated, Ardern has also promised she won’t impose more lockdowns.

Health officials have been reporting about 200 new virus cases each day as an outbreak of the omicron variant grows. Sixteen people are currently hospitalized because of the virus.

Wellington City Council spokesperson Richard MacLean said it had not been ticketing illegally parked vehicles near Parliament due to concerns over staff safety but was considering its options to get the roads reopened in what remained a volatile situation. He said the council was advising people to avoid the area.