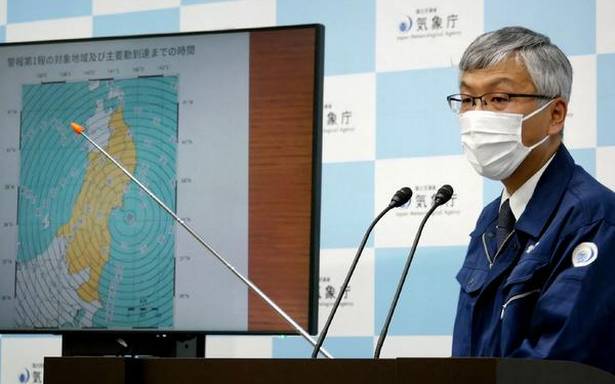 Two people were injured in Miyagi and another in the neighbouring prefecture of Fukushima, but none of the injuries were life-threatening.

A strong earthquake struck off northern Japan early on Saturday, causing no risk of a tsunami but leaving three people injured and shaking buildings in Tokyo, authorities said.

The U.S. Geological Survey said the magnitude 6.8 earthquake hit at a depth of 47 kilometers off the coast of Miyagi prefecture.

Two people were injured in Miyagi and another in the neighbouring prefecture of Fukushima, but none of the injuries were life-threatening, said the Fire and Disaster Management Agency.

There was no major disruption in transportation, although Shinkansen bullet trains were temporarily suspended for safety checks and some local lines were delayed, the East Japan Railway Co. said.

Miyagi prefecture, in the country’s rugged northeast, was heavily damaged by the 2011 earthquake and tsunami that left more than 18,000 people dead.

Japan’s Nuclear Regulation Authority said no abnormalities were reported at nuclear plants, including the Fukushima Daiichi, which melted down following the 2011 disaster.

Late last month, another strong earthquake occurred off the coast of Miyagi prefecture, triggering a tsunami advisory for a part of the northern coast. No major damage was reported, but several people had minor injuries.

In mid-February, another powerful quake in the region killed one person and left more than 180 injured, although most injuries were minor.