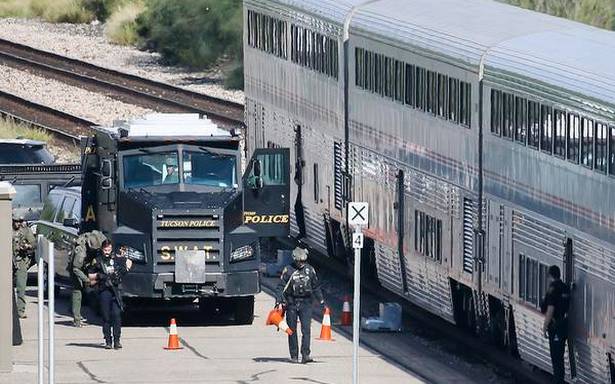 There were 137 passengers and 11 crew members, he said. All have been evacuated to the station.

One person is in custody after someone opened fire Monday aboard an Amtrak train in Tucson, Arizona, causing passengers to flee, police said.

The shooting happened just after 8 am on a train parked at the station in the city’s downtown. Authorities said the scene has been secured and there is no further threat.

There are no reported injuries to the crew or passengers, said Amtrak spokesman Jason Abrams.

The Sunset Limited, Train 2, was travelling from Los Angeles to New Orleans, and arrived at the Tucson station at 7:40 am, Abrams said.

There were 137 passengers and 11 crew members, he said. All have been evacuated to the station.

Evan Courtney was in a lounge car when people suddenly came running in yelling: “Shots fired!” “I grabbed my backpack and ran,” Courtney told The Associated Press via Twitter direct messaging.

He said he huddled with other passengers while looking out the window. He saw several tactical police officers with assault rifles behind barricades. After 15 minutes, “police ran to us and told us to get out of the car and run in the opposite direction.” Courtney later tweeted a photo of nearly two dozen officers including two embracing.

Dramatic video on social media taken from a camera at the Southern Arizona Transportation Museum shows some of the shooting. Multiple shots can be heard from inside a train before an officer with a dog enters the car. More shots are heard and that same officer is seen fleeing with the dog in tow.

Tucson, home to the University of Arizona, is 113 miles (182 kilometers) south of Phoenix.