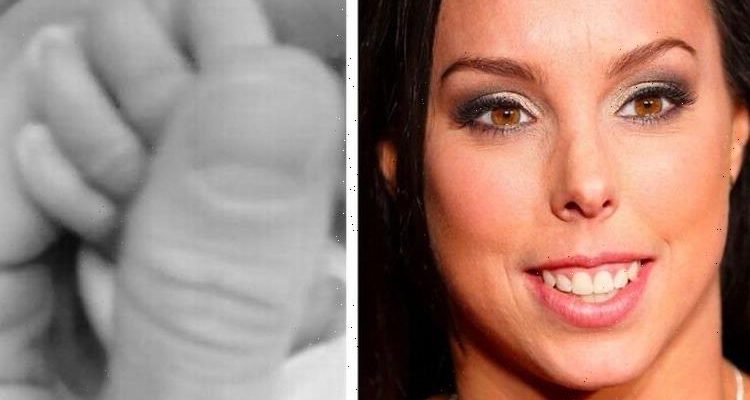 Former Olympic gymnast and sensational Dancing On Ice star Beth Tweddle MBE was delighted to report that she has welcomed her second baby. The latest arrival, a son, follows hot on the heels of her three-year-old daughter Freya.

Excited to introduce the newest member of the Allen family, Finley. 17.3.22

37-year-old Beth is famed for becoming the first British female ever to win a medal for gymnastics at the World Championships, European Championships and Olympic Games.

And the star has now grown her brood to become a mum-of-two.

The sporting champ had kept it carefully shrouded in secrecy for weeks, only letting on that he had arrived when she was ready.

The first followers knew of the birth was a touching Instagram photo depicting her holding her newborn son’s tiny hand in hers.

The emotional star captioned the image: “Excited to introduce the newest member of the Allen family, Finley. 17.3.22.”

She and Andy Allen, who she met during a presenting gig, are raising their family as a married couple.

Meanwhile the star, indisputably one of the country’s most successful gymnasts of all time, has been inundated with congratulations.

The warm wishes have arrived not just from the public, but also from fellow female sporting stars.

Gymnasts Jessica and Jennifer Gadirova offered their “massive congratulations to the both of you”.

Mark Charnock thanks Georgia Taylor after ‘taken for granted’ claim

The happy news has come after a past filled with its fair share of trauma.

Several years ago, Beth had a harrowing accident after breaking two bones in her back while starring in the Channel 4 reality show The Jump.

She’d crashed into a barrier and was ousted from the competition after requiring surgery on her spinal cord and neck.

Tragically, she’d told the world in the aftermath of the episode that she was unsure whether she’d “ever be 100% again”.

“The effects of my accident still interrupt my daily life and, aside from the severe physical injuries at the start, the hardest part of the recovery process has been the psychological element,” she said.

“Dealing with and processing the whole accident and the aftermath of what happened.”

The accident took place after her Dancing On Ice success, which saw her strike gold in 2013, warding off competition from boxer Luke Campbell and actor Matt Lapinskas.

It is usually TV favourite Dancing On Ice that is known for being perilous, with host Phillip Schofield recently confessing that he’d been banned by bosses from taking to the rink over injury fears.

Yet for unlucky Beth, it was The Jump that caused her traumatising injuries.

Fortunately, she has now overcome the adversity and launched her own business, Total Gymnastics, which she runs alongside caring for her youngsters.