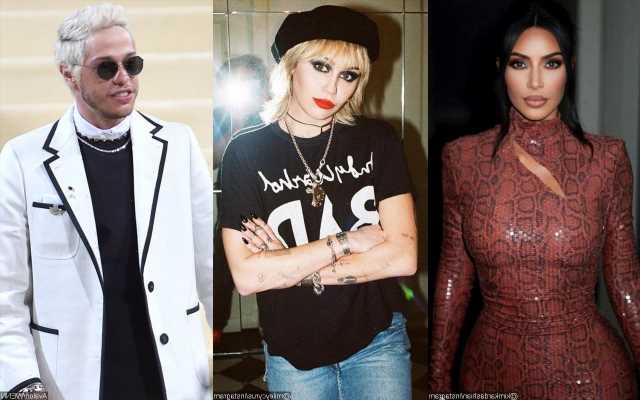 AceShowbiz –Kim Kardashian is apparently jealous of Miley Cyrus‘ close relationship with Pete Davidson. The reality TV star has unfollowed the former Disney starlet on Instagram after the singer co-hosted a New Year’s Eve special with the comedian.

It was a Miley fan account, @MileyEdition, which first noticed this. According to the account, the SKIMS founder was still following the “Wrecking Ball” songstress as of December 10, the same day Page Six reported that Miley was visiting Pete’s apartment in Staten Island after the taping of their “The Tonight Show Starring Jimmy Fallon” appearance.

But as of Tuesday, January 4, Kim is no longer found on the list of Miley’s followers. The “Hannah Montana” alum, meanwhile, is still following the former “Keeping Up with the Kardashians” star.

It’s unclear why Kim unfollowed Miley, but this arrives after the latter’s live NYE special, which she co-hosted with Pete. During the extravaganza, the two sang a duet of Will Smith‘s “Miami” onstage.

Miley also hinted at a potential romantic interest in Pete while promoting their event on “The Tonight Show”. At the time, the former wife of Liam Hemsworth serenaded the “Saturday Night Live” star, singing, “I said, it should have been me,” which sounded like a jab at Pete and Kim’s romantic relationship, which began in October 2021.

She continued, “Pete Davidson, how you gonna do this to me?” On the late-night talk show, Miley and Pete also revealed they had gotten matching tattoos. Their inks both read, “We babies.”

While Kim and Pete celebrated New Year’s Eve separately, the two have since reunited. On Monday, January 3, the pair were seen boarding a private plane to head to the Bahamas for a romantic post-New Year’s vacation.