So, even though the Queen’s Platinum Jubilee has been packed with four days of pretty much nonstop events, just about every single one of those has been overshadowed by the fact that Prince Harry and Meghan Markle are officially back in the U.K. and making official royal appearances together for the first time since their royal exit in early 2020.

As anyone who has read even the bare minimum of headlines about the royal family in the past few years knows, Harry and Meghan are long-rumored to be on less-than-great terms with the rest of the royal family (and rumors of a feud between Harry and his older brother, Prince William, have been circulating for even longer). As such, there are many corners of the internet where people are waiting, popcorn in hand, for pictures of Harry and Meghan interacting with other royals that can be dissected for ~signs~ of how things are going.

The most coveted of these hypothetical pictures by far, is one of the former Fab Four (i.e. Harry, Meghan, Will, and Kate Middleton) all together, face-to-face in public for the first time in literally years at this point. There were hopes that this photo op would manifest on Thursday, when all four were in attendance at the Platinum Jubilee’s national service of Thanksgiving at St. Paul’s Cathedral, but the royals took pains to make sure said photo op was impossible, staggering their arrivals and exits from the event and sitting far enough apart to make chitchat of any kind impossible: 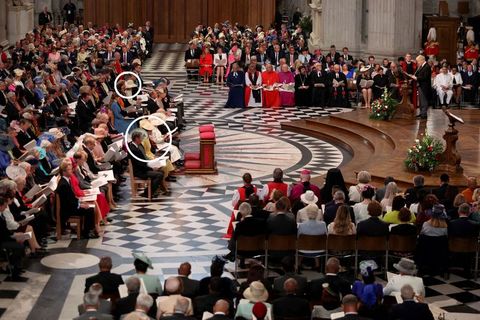 There were some very boring, logistical reasons offered for why Harry and Meghan sat so far away from Will and Kate at the service.

“Senior members of the royal family were seated in the front row and non-senior members in the second row,” a royal insider told Us Weekly.

But, the source admitted there were also some let’s-try-our-best-to-avoid-more-feud-stories reasons, adding that the palace decided “to keep them on opposite sides of [the] cathedral to avoid any unwanted attention” specifically because the couples were “scrutinized” during Harry and Meghan’s final engagement before their royal exit, the 2020 Commonwealth Day Service.

Unfortunately, there really doesn’t seem to be a way of avoiding Fab Four Feud scrutiny at this point.