Police have been looking for her after a video emerged three days ago showing the assault, which took place on October 4 last year. 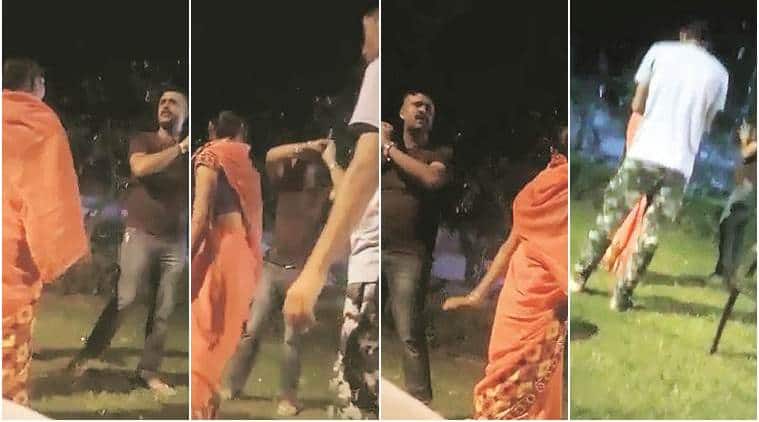 A GIRL who was beaten with a belt by Faridabad Police personnel at a park last year is 18 years old and went missing from her home last October, weeks after the assault, her family has told The Indian Express.

Police have been looking for her after a video emerged three days ago showing the assault, which took place on October 4 last year. The accused, two head constables and three special police officers, have been sacked and arrested.

According to the girl’s family, this is the third time she has gone missing, and each time a police FIR was filed. According to the FIRs, the first time was on October 10, 2017. Her brother said she disappeared when she had gone to the fields with their father.

ASI Sher Singh, in charge of the Mundkati police post, said, “She was found within a few days at that time, wandering around in the area where her family resides. She was reunited with her family but left home again in July, 2018.”

The girl’s mother said the second time she went missing was on July 10, 2018. “I had left my daughters at home and gone to work in the fields. When I returned, (my older daughter) said her sister had gone somewhere. I searched the neighbourhood but she was untraceable,” she stated.

On the intervening night of October 4-5, the family received a phone call and were called to Adarsh Nagar police station, where they were reunited with the teenager.

It was not until Tuesday, when police personnel showed them the viral video, that they realised she had been assaulted before being brought to the police station.

“My sister told us that there had been some misbehaviour on part of the police, but she never told us she had been hit or anything like that. We only found out about it after we saw the video,” said her elder brother.

Then, on October 28, 2018, she went missing from her home again. An FIR was registered at Hodal police station on October 29.

In her complaint, her mother said the teenager left the house around 2 pm, possibly with her Aadhaar card and Rs 4,000.

Speaking about the video of the girl being hit with a belt, Faridabad Police said the accused officers were responding to a call claiming that a man and a woman were “doing something wrong” in a park. The man fled on seeing police personnel.

ASI Sher Singh said, “The child was retrieved on the intervening night of October 4-5, and had appeared before a magistrate on October 5. At that time, she had also alleged she was sexually assaulted by an unknown person in the park… Relevant sections of the IPC were added to the FIR, but we have not been able to procure any leads about the man accused of this crime.”

“The girl herself left home again on October 28, and has been missing ever since… We do not know why she keeps leaving. We have asked her family as well but her mother simply says she is a difficult child and would not listen to her parents. We are trying to trace her,” he said.

The girl’s mother said: “I do not know why she keeps running away; she has been influenced by some girls she met in school. She is not willing to get married. We did not have a fight or argument before she left; I just hope day and night that she is safe.”

She said her daughter had not told her where she had gone when she went missing in July last year.

Faridabad Police said the video had been recorded by one of the accused. “One of the SPOs, who is not visible but whose voice can be heard, recorded it. It is unclear how it reached social media. That has to be determined through investigation,” said Sube Singh, PRO of Faridabad Police.