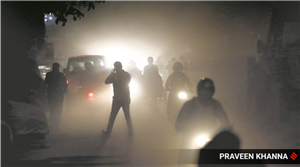 The joint call to action comes from non-attainment cities like Ludhiana, Amritsar, Khanna, Patiala, and others, which are reeling under poor air quality, which isn’t just limited to winters. In a first of its kind campaign, ‘concerned’ citizens and civil society organizations across Punjab have demanded that Urban Local Bodies (ULB) mandatorily issue timely health advisories for the public in order to alert citizens about ‘bad air’ days, which will help save vulnerable groups from severe health impacts of air pollution.

The joint call to action comes from non-attainment cities like Ludhiana, Amritsar, Khanna, Patiala, and others, which are reeling under poor air quality, which isn’t just limited to winters.

Bad air days are when the air quality index (AQI) – pollutant measuring indicator – rises beyond the safe limit for a location and the air in the area is deemed as either poor, very poor, or hazardous.

The online campaign was initiated on September 7, which is also the International Day of Clean Air for Blue Skies. In its second year since its inception, the theme for 2021 was ‘Healthy Air, Healthy Planet’, which highlights the health aspects of air pollution, especially considering the Covid-19 pandemic.

Punjab has a total of nine non-attainment/million-plus cities under the National Clean Air Action Plan (NCAP). A non-attainment city is one that does not meet the prescribed air quality standards set by the Union environment ministry. Overall, the campaign has been started across 132 non-attainment cities in the country.

Supreet Kaur, President of EcoSikh India and member of Punjab Clean Air Collective – a collaborative network of citizens organizations and institutions working towards the common objective of clean air – said that it was a pan-India, citizen-led online campaign that they hoped will make a difference. “Breathing in pollution-free air is the fundamental right for all. Through this campaign, we want to intensify the need to breathe clean air. We want the citizens to be well informed so as to take necessary actions to safeguard the lives of all. We urge everyone, be it children, youth, or the elderly, to support this cause,” stated Supreet.

She added that as part of this campaign, citizen groups across all non-attainment cities in Punjab will also plan and meet their respective municipal commissioners and submit a letter demanding that health advisories be issued when air quality deteriorates.

The online petition so far has been shared widely on social media and WhatsApp groups across Punjab and has witnessed active participation from many people.

Ludhiana-based senior scientist, Dr Prabhjot Kaur, who is the head of the climate change department of Punjab Agricultural University, said, “Punjab, with nearly 83 per cent of its area under cultivation, is predominantly a green state. Despite this fact, the AQI of Punjab in May 2021, ranged from 68-220, which indicates that the air quality ranged in the Poor to very poor category. This continued even during the lockdown period despite reduced vehicular and industrial pollution, which highlights the need to explore the possible reasons for the deteriorating air in the state.’’

KS Pannu, former bureaucrat, and advisor NHAI Punjab, said, “Ludhiana is home to 30 lakh people who unfortunately have to constantly suffer from pollution in the air. One of the measures decided by the Centre and the state was to introduce cleaner CNG fuel, which Ludhiana missed due to some nagging litigation with the supplier company. The state government should take proactive steps to bring in CNG at the earliest. The state, society and all NGOs should work in tandem to encourage electric three-wheelers in the city. Moreover, the issue of burning paddy straw in the winter months must be solved to ensure cleaner air for citizens.”

Divya Narayanan, campaigns director for Jhatkaa.org, which has created the portal for the current citizen’s campaign, said that the pandemic had forced us all to seek out as much information as possible in order to safeguard our health and that of our loved ones against the virus. “In the same manner, we must realise that we need to demand more information to be made widely available about the air we breathe, and its effects on our health. It’s all the more important now in light of Covid-19, that we have information widely made available to us so we can make saner choices for our health on bad air days,” she said.