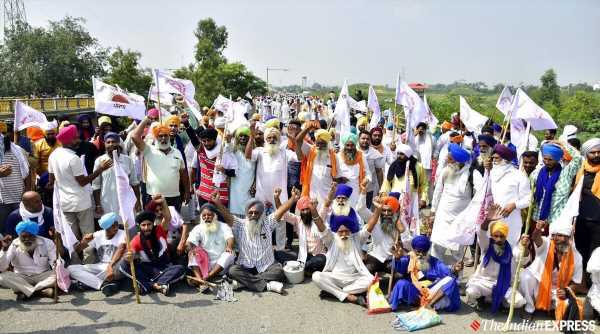 While five farmers died by suicide per week on average last year, the protest against the three laws at Delhi borders and in parts of Punjab took 16 farmers' lives per week from November 26 to February 19. As many as 248 farmers have died during protest against three Central agriculture laws in just 87 days, according to the data collected by Sanyukat Kisan Morcha (SKM).

The victims comprised 202 from Punjab, 36 from Haryana, six from Uttar Pradesh, one each from Madhya Pradesh, Maharashtra, Tamil Nadu and Uttrakhand. Most of the deaths happened due to heart attack, illness due to cold weather conditions and accidents. This data has been collected from November 26, 2020, to February 20 this year.

While five farmers died by suicide per week on average last year, the protest against the three laws at Delhi borders and in parts of Punjab took 16 farmers’ lives per week in the past three months (from November 26 to February 19).

In January this year when the cold wave was at its peak, around 120 farmers, including 108 from Punjab alone, died during the protest. The majority of them were sitting at Delhi borders while some others died in accidents while going to or coming back from the protest sites.

Forty-one farmers from Punjab died this month till February 19. Around 10 from other states died during this period.

In December last year, 48 farmers from Punjab and around 10 from Haryana had died. Five from Punjab had died from November 26, the day when the farmers started their march to Delhi from Punjab, to November 30 last year.

“Our farmers are living in tractor trolleys in harsh conditions. The conditions are unhygienic too because one cannot find clean toilets on the roads because of which several farmers picked illnesses and died due to several types of ailments such as cold, heart attack, brain haemorrhage, diabetes and pneumonia. Several lost their lives while travelling on the highways day and night to Singhu and Tikri borders,” said Bhartiya Kisan Union (Dakaunda) general secretary Jagmohan Singh, adding that several of farmers could not get timely medical aid. According to the data, farmers of every age group — from 18 years to 85 years — have died.

“These are pure murders as the government could have solved the problem within a week of farmers reaching Delhi borders. But the government was indifferent towards its own people,” said Jagmohan, adding that a large number of farmers suffered cardiac arrest due to extreme cold.

Dharminder Singh Pashour, block president of the Lehra Gaga unit of the BKU (Ugrahan), which records farmer suicides in the state, said that last year there were 12 farmer suicides in January, 20 in February, nine in March, 16 suicides in April while 15 farmers died by suicide from May 15 to June 20.

Sukhdev Singh Kokrikalan, general secretary, BKU (Ugrahan), said that the government’s cruelty has killed farmers in their 20s and 30s and “we will not let their sacrifice go waste”. “We will continue our battle till our demands are met,” he added.

Compensation to kin of 100 deceased farmers

Viswajeet Khanna, Additional Chief Secretary-cum-Financial Commissioner (Revenue and Rehabilitation), said that the Punjab government has been providing Rs 5 lakh each in compensation to the families of those farmers who lost their lives during the protest against farm laws. The grant is being released from the Chief Minister’s Fund.

Sources in the government said that the compensations to the kin of close to 100 deceased farmers has already been released by the government.

“In Malwa region, we got released compensation to the families of around 100 farmers who died during the protest while the process for others is going on,” said Sukhdev Singh Kokrikalan, general secretary, BKU (Uhrahan).

Also, a blog, ‘Deaths in farmers protest at Delhi border since 24 November 2020’, has been created by one Anuroop with the help of SKM. It details deaths of farmers on the basis of English and vernacular newspapers.