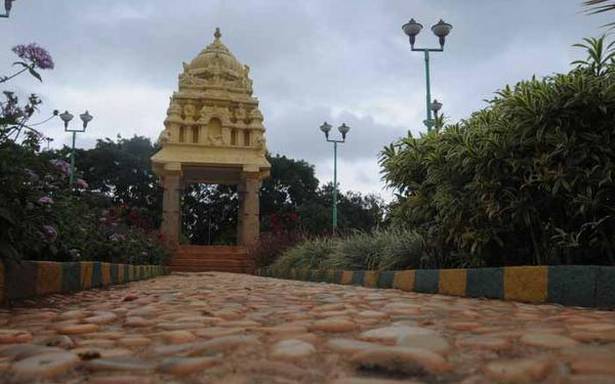 They are located in Bengaluru Urban, Bengaluru Rural, Ramanagaram, Chikkaballapura and Tumakuru districts

A total of 46 Kempegowda heritage sites identified in three circuits would be developed at a cost of ₹223 crore for promoting tourism, said Chief Minister B.S. Yediyurappa on July 6.

A 108-foot statue of Kempegowda would be installed at Bengaluru international airport at a cost of ₹64 crore. Work on the statue is in progress and a central theme park spread over 23 acres, depicting the history of Nadaprabhu’s lifetime, would come up there, the Chief Minister said.

The tomb of Kempegowda at Kempapura village in Ramanagaram district would be developed at a cost of ₹32 crore. The land acquisition process is under way. A total of 46 families would lose their land for this project, and they would be rehabilitated with all facilities, the Chief Minister said.

Mr. Yediyurappa told officials to promote tourism by developing forts, tanks, and heritage places of the Kempegowda era. Departments of tourism, forest, horticulture, minor irrigation, BBMP, Religious Endowment and PWD were told to work together to develop heritage places in and around Bengaluru.

The Chief Minister also chaired a meeting of the Kittur Development Authority and approved a plan of ₹10 crore in 2021-22. Since its inception, the Authority has spent ₹19 crore and completed 104 works out of the 106 proposed works, officials informed.

Construction of Rani Chennamma Memorial Hall at Kittur, development of burial place in Bailhongal taluk, which was in a poor state of affairs due to poor maintenance, and other works have been approved in the plan.

Mr. Yediyurappa instructed officials to complete the first phase of the Basaveshwara international museum, on the life and works of the 12th century social reformer, at Kudalasangama. The first phase has been taken up at an estimated cost of ₹94 crore.

It was decided to develop Sharana Gangambike Ikya Mantap at M.K. Hubli town at a cost of ₹1.25 crore.

It was also decided to waive rent of ₹2.97 lakh of 81 shops belonging to the Kudalasangama Development Authority. Business of shops were impacted by floods.