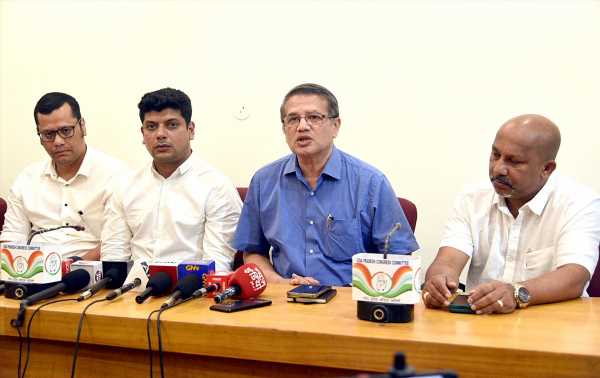 The three remaining MLAs of the Congress in Goa on Wednesday said they would stay with the party in the wake of the exit of eight fellow legislators who have crossed over to the ruling Bharatiya Janata Party.

The opposition party termed the defection by eight out of its 11 MLAs in Goa only seven months after the assembly elections as the “height of betrayal and shamelessness.”

The three MLAs who did not switch sides — Yuri Alemao, Altone D’Costa and Carlose Alvares Ferreira — spoke at a press conference in Panaji in the presence of state Congress chief Amit Patkar.

“The party is not dependent on MLAs. Congress will remain firm in the state even if the MLAs have left it,” Alemao said.

“We are giving our word that we will be with the party and will remain strong. We are not some commodity that can be purchased,” he added.

Stating that prior to the February elections Congress candidates had taken oath not to defect, Alemao further said, “I don’t know how someone can defy God.”

Carlose Alvares Ferreira said the eight MLAs could not be said to have merged with the BJP.

“If they have merged Congress into the BJP, then which party we (three) belong to,” he asked.

Ferreira, a former advocate general, said the same thing happened in 2019 when ten out of 15 Congress MLAs joined BJP.

“The Congress party has challenged it in the court. The matter is pending before the Supreme Court,” he said.

Altone D’Costa said he was happy that he stood by the party on whose ticket he was elected.

Patkar said the party had taken all the precautions against defections.

“Earlier, the BJP was murdering democracy at night, now they are doing it in broad daylight,” he said.

Congress’s Goa desk in-charge Dinesh Gundu Rao tweeted that the actions of Digambar Kamat and other seven MLAs who defected amounted to betrayal.

“Isn’t this the height of betrayal and shamelessness by @digambarkamat, @MichaelLobo76 and the others,” he said.

“People of Goa voted for these MLAs as they were @INCGoa candidates. They had sworn in front of temples, church and dargah that they will not defect to #BJP. They gave affidavits that they will always be with the Congress and took a pledge on the Constitution,” he said in another tweet.