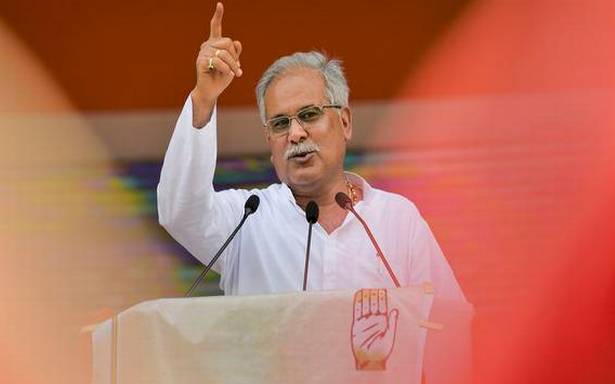 The groundswell of anger against the BJP will be reflected in the Uttar Pradesh election, the Chhattisgarh Chief Minister said

The people of Uttar Pradesh do something new in every election and after voting on caste and religion basis in the past, they are ready to vote based on issues concerning them this time, Chhattisgarh Chief Minister Bhupesh Baghel said.

Mr. Baghel, who is the senior poll observer for the Congress in Uttar Pradesh, in an interview to PTI said the party will contest on all the seats in the state in the upcoming assembly elections, giving 40% seats to women this time.

“The Congress will fight the polls under the leadership of Priyanka Gandhi Vadra, who has fearlessly and aggressively raised people’s issues in the state, be it farmers’ problems, unemployment, price rise or dwindling incomes, or atrocities against Dalits, women and youth,” he said.

This will benefit the Congress, the senior leader asserted.

He also said that farmers have not forgotten their “humiliation” at the hands of the BJP government after what happened with them in the last over a year and over “700 of them losing their lives”. They will vote out the BJP this time, Baghel said.

The groundswell of anger against the BJP will be reflected in the Uttar Pradesh election, the Chhattisgarh Chief Minister said.

“The people of Uttar Pradesh do something new in every election. Uttar Pradesh gives you answers to the questions of the present times,” Mr. Baghel said.

He said there was a time when people voted on the basis of caste, and (Bahujan Samaj Party supremo) Mayawati and (Samajwadi Party president) Akhilesh Yadav became chief ministers.

They again voted on the basis of religion and the BJP, which was number four in 2012, emerged as the winner in the 2017 assembly polls, Baghel said.

“But, the people of Uttar Pradesh now want to vote on their issues – be it price rise and reduced incomes, unemployment, farmers, Dalits, youth, employees, women. Only the Congress is addressing these issues and Priyanka ji has talked about all these issues in the party’s pledges,” he noted.

The Congress leader admitted that in the last election, people rejected the coalition and the Congress-Samajwadi Party combine lost badly due to anti-incumbency of the Akhilesh Yadav government.

“But, now, every one is contesting differently and all have different agendas. However, no one is addressing people’s issues,” Mr. Baghel said.

Only Priyanka Gandhi is addressing issues, be it about farmers, employees or art and craft and local industries of different regions, he said.

Asked if the opposition vote will be divided with all parties contesting separately, he said, “Opposition vote will not be divided. Those who neither like Akhilesh Yadav or (Chief Minister) Yogi Adityanath, will vote for the Congress.” The senior Congress leader noted that people are not connected with only one party and said if one sees the journey from 2012 to 2022, there are a lot of ups and downs, and they have voted on different issues.

“We have seen several combinations also play out – be it Dalit-Brahmin, Yadav-Muslims, experimented with religion, as well as on caste basis. But they (people) feel they did not get anything out of it,” he said, adding that they will vote for those raising their issues this time.

He said under Priyanka Gandhi, the party is moving forward while taking common people’s problems and she has helped the Congress emerge as a third alternative before Adityanath and Yadav.

Mr. Baghel noted that the groundswell over farm laws and farmer agitation is very much alive and they will vote the BJP out.

“The farmers will not forget what has happened to them and will vote against the BJP. The government has earned the distinction of having a ‘ghamandi chehra’ (arrogant face) over the farm laws issue. (Prime Minister Narendra) Modi ji is not working any more and the BJP is getting a beating in every state,” he noted.

Asked about the Congress prospects in the next round of assembly elections, including in Uttar Pradesh, Uttarakhand, Goa and Punjab, Baghel said it will be in favour of the Congress party and some good results will come out.