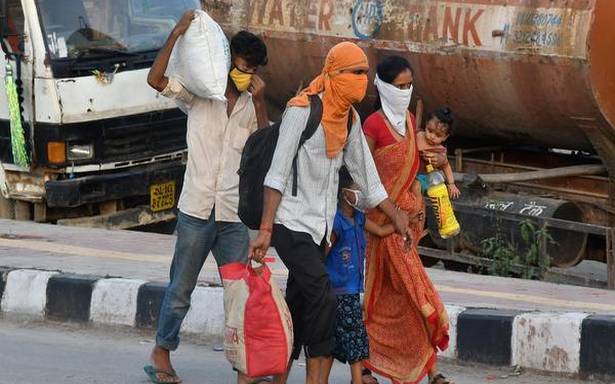 The Rapid Rural Community Response, or RCRC to COVID-19, a collective of over 60 non-governmental organisations has collected three rounds of data since the lockdown. The data provide crucial evidence of the nature and persistence of food and financial insecurity among the poor residing in rural areas.

Cutting down on food

The most recent data suggest a persistence of cutting down on food even nine months after the first lockdown, during the seeming “revival” period. While 40% of the sample cut down on food during the first lockdown, an alarming 25% reportedly continued to cut down on food during the most recent survey conducted between December and January 2021. Households reported cutting down on nutritious food — 80% cut down on milk, vegetables, pulses and oil (around 50% reported cutting down on pulses alone). Disaggregating the figure, we find that the poorer, socially marginalised Dalits, and those with lesser access to food security schemes (such as migrants) faced more severe food insecurity. Comparing similar households, we find households in Uttar Pradesh and Jharkhand were faring among the worst performing States. These reductions will undoubtedly further accelerate the impending effects on children’s nutrition, as highlighted in the National Family Health Survey or NFHS-V (2019-20) and the Global Food Policy Report, 2021.

The loss in nutrition may have come as a consequence of people losing their jobs and/or being pushed into lower income brackets over time due to the nature and handling of the pandemic.

Pew Research Center has indicated that the middle class in India has shrunk by over 32 million households in the past year. We find an indication of a downward shift in incomes even among a much poorer sample of households. Our survey suggests an over 70% reported reduction in incomes post the pandemic, with many falling into significant precarity. While 55% of households recalled earning less than ₹5,000 per month prior to the pandemic, around 74% reported doing so in December 2020-January 2021. It is thus unsurprising that around 30% households were also seeking loans, and among them, at least half of them reported needing loans for food, all indicative of the debilitating food and financial insecurities that poor households continue to face.

Migrants on the margins

The second wave of the pandemic comes on the back of an uneven recovery and persistence of crippling food and financial insecurity among the poorest households, especially migrants. Migrants who have travelled to cities only months ago are again travelling back to their villages. In our sample, 74% households had migrant members who had returned to the village during or after the lockdown (in mid-2020); 57% among them had gone back to the destination city by December-January, with 59% of those remaining also wanting to go back. It was the relatively disadvantaged who had not been able to find their way back to the cities. There was limited support for migrants even in existing social protection schemes such as the Mahatma Gandhi National Rural Employment Guarantee Act (MGNREGA). For example, among the poorest, households with migrants were more likely to seek work than those without (43% versus 32%), but less likely to get work (49% versus 59%) under the scheme.

It is clear that households have not had a chance to rebuild, and with many completely exhausting their savings and facing massive debt, they are bound to be more severely hit than last year. In the face of such a threat, including high unemployment that is steadily rising again, the state must ensure immediate, sustained action.

Food security is a must

The Government has promised to restart the Pradhan Mantri Garib Kalyan Anna Yojana (PMGKAY) with 5 kg of rice/wheat per person per month for the next two months. The government needs to provide similar support for stabler longer periods; expand the current offering to include nutritious foods like pulses; address issues faced in existing schemes such as MGNREGA (like delays in wages and rationing); and new schemes such as a potential urban employment scheme should be explored. Food security schemes such as ration provided to children through anganwadis, Public Distribution System and mid-day meal scheme in primary schools need to be ramped up systematically and urgently. For migrants stuck in cities without work, community kitchens (such as Amma canteens) are required. The most vulnerable will need more predictable and stable support than ever before.

Karan Singhal is a researcher, Advaita Rajendra is a PhD student and Ankur Sarin is a faculty based out of the Indian Institute of Management, Ahmedabad. The views expressed are personal