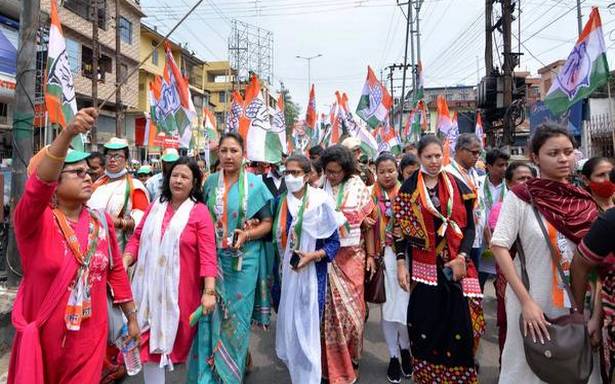 The Central and State leaders of the Congress on Saturday staged a protest in Guwahati against the BJP’s alleged manipulation of electronic voting machines (EVMs).

State Congress president Ripun Bora also wrote to the Election Commission citing another instance of EVM ‘theft’ in central Assam’s Diphu after polling officials in southern Assam’s Karimganj district were ‘caught’ carrying EVMs in the vehicle of the wife of a BJP candidate on April 1.

In a letter to Assam’s Chief Electoral Officer Nitin Khade on Saturday, Mr. Bora said several EVMs were found by local people in the trunk of a luxury car “not requisitioned for election purpose” near the Hatipura polling station in Karbi Anglong district headquarters Diphu “under mysterious circumstances”.

“Several EVMs were seized from a vehicle in Jamunamukh constituency [central Assam], which were being carried by government officials in the absence of any security personnel. No security personnel were present in the vehicle,” the complaint said.

The party also sniffed foul play in western Assam’s Kalaigaon constituency where an EVM was found missing and raised issues of EVM malfunctioning in 139 polling stations across five districts during elections on April 1.

Mr. Bora’s letter also complained about suspicious individuals “seen loitering within a restricted area of the strongroom set in Dibrugarh” and urged the poll panel to “cause enquiries and take legal actions against all individuals found guilty”.

An accident involving a vehicle carrying EVMs allegedly without any armed escort in southern Assam’s Silchar town drew the attention of the Congress and its ally All India United Democratic Front too.

The Cachar district authorities trashed any mischief. “These were unused EVMs being brought to the strongroom from an intermediate strongroom for stock-taking,” a district official said.