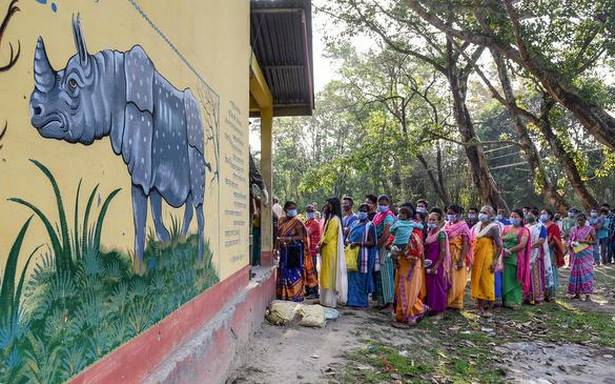 Here are the live updates of assembly elections counting results in the state of Assam.

The three-phase Assam Assembly elections were held on March 27, April 1 and April 6. NDA, UPA, URF and others are in fray.

The phase 1 voter turnout was 72.1% where Assam witnessed heavy turnout in the first phase of pollling. The contest was between the ruling BJP, its alliance partner the Asom Gana Parishad, opposition Congress and the newly formed Assam Jatiya Parishad in the first of a three-phased Assembly elections. In the fray for the 47 constituencies which went to polls, were some 264 candidates, including 23 women, amid strict security and COVID protocols.

During the phase 2 voting, the fate of five ministers, the deputy speaker and a few significant opposition faces stood in 39 seats. The voter turnout surpassed 73%. In all, 345 candidates, including 26 women, were in the fray in this phase.

Polling for 40 seats in the final phase of the assembly elections saw 82.28% voter turnout. A direct contest between nominees of the BJP-led NDA and Congress-headed Grand Alliance was on in 20 constituencies while there was a triangular fight, including friendly contests, in the remaining seats with the Assam Jatiya Parishad (AJP) being considered as the third force.

The outcome of the poll could determine the direction of the debate around the National Register of Citizens (NRC) and the Citizenship (Amendment) Act (CAA). While there is a view elsewhere that both the CAA and the Supreme Court-mandated exercise of updating the NRC are exclusionary processes, in Assam there is considerable support for the NRC and opposition to the CAA.

That explains why the Congress claims credit for piloting the NRC project while staunchly opposing the CAA since it discriminates on the basis of religion.

Take a look at the maps depicting the constituency-wise turnout in Assam in 2021.