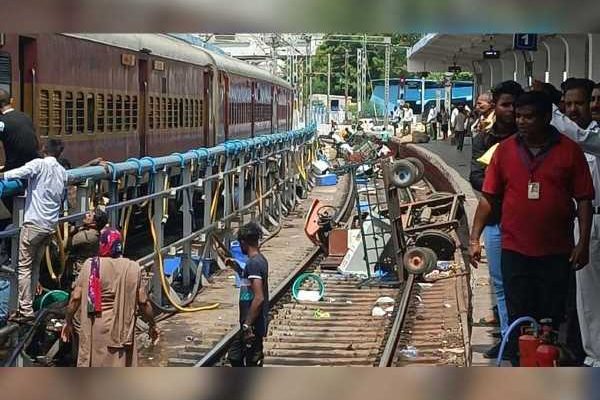 The tension prevailed in the Secunderabad Railway Station when several youngsters staged a protest against the Central government’s Armed Forces recruitment scheme Agnipath on Friday.  The protestors barged into the railway tracks and platforms damaged the food stalls, luggage, and partially torching a goods compartment set fire to trains at Secunderabad railway station and vandalised the station premises. Violent protests at Secunderabad railway station against the Centre’s Agnipath scheme were not spontaneous. Multiple audio messages are  circulating among the  protesters affirm clinical planning, and  the mob mobilisation. Now, audio doing rounds on social media disclosing the conspiracy behind the violence.

An audio call buttresses the conspiracy angle. “When r u coming tomorrow to Secunderabad railway station? Come armed with the petrol, tyres and  the old clothes. We will not get these at railway station. So, if you bring these along, we can torch the  vehicles and trains and disrupt railway services.” This was one of msg that was  found on a mobile phone of a protester.

According to the circulating audio clip, a guy told to other person that he was on the way to the petrol bunk to get the petrol and asked others to join hands with them. He said that if they set fire to the trains then the news will come to light.

A police officer said, “The conspiracy to strike Secunderabad railway station was hatched on Thursday and protesters were mobilised.”

A police officer added that  primary organizers founded Whatsapp groups such as Justice for Army CEE and Hakimpet Army Soldier to plan the violence at Secundrabad station.