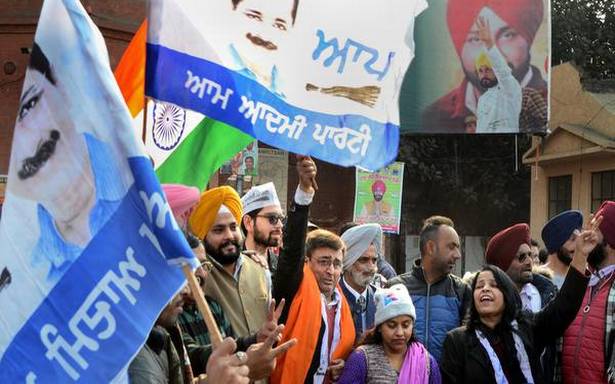 On Tuesday, nominations were filed by AAP and BJP candidates for the posts of mayor, senior deputy mayor and deputy mayor

The Aam Aadmi Party and the BJP will slug it out in the Chandigarh Municipal Corporation mayoral elections slated for January 8.

The Congress, which had ended up winning eight of the 35 seats, has opted out of the race.

On Tuesday, nominations were filed by AAP and BJP candidates for the posts of mayor, senior deputy mayor and deputy mayor.

According to AAP senior leader Pradeep Chhabra, his party has fielded Anju Katyal for the post of mayor.

On the other hand, the BJP has put up Sarabjit Kaur. Both candidates for the mayor’s post are first-timers.

The post is reserved for a woman councillor in the new MC House’s first year.

Notably, AAP councillors, who were in Delhi on Monday, returned to the city on Tuesday.

Ms. Harpreet, the councillor from Ward No.10, switched over to the BJP along with her husband and senior Congress leader Devinder Babla here.

The results of the Chandigarh Municipal Corporation polls, which were declared on December 27, threw up a hung verdict, with AAP winning 14 of the 35 wards and the BJP bagging 12.

The Congress had to be contented with eight seats while the Shiromani Akali Dal got one.

A party is required to win 19 wards to have its councillor elected as the mayor.

Besides 35 councillors, the Chandigarh MP, who is an ex-officio member in the municipal corporation, has a voting right.

Kirron Kher is the incumbent MP from Chandigarh.