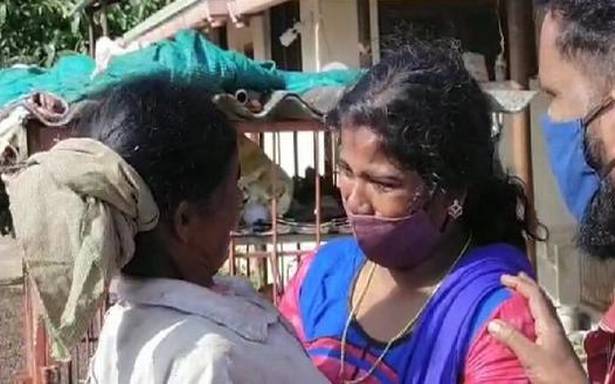 Separated as a child, Anjali met Chaitra again thanks to efforts by her husband and social workers

It was a scene straight from a tear-jerker as a young woman ran to hug an elderly woman walking unsteadily towards her amid the lush green of a coffee estate.

But it was not a staged drama for 31-year-old Anjali and her mother Chaitra, who were tearfully reunited after 22 years in Mudigere taluk of Chikkamagaluru district on Tuesday.

The story goes 22 years back when Anjali, the fifth child of Chaitra and Kalimuttu, got separated from her parents. The couple had moved from Tamil Nadu to Mudigere in Karnataka to work at a coffee estate.

Recalling the traumatic events at the turn of the century, Chaitra says during that time, timber merchants from Kerala used to visit Mudigere. Some of them had brought elephants and mahouts with them to transport the wooden logs.

“A mahout’s family had camped close to the estate where we were working and children of both the families were playing together. One day, Anjali went missing. I searched for her everywhere but I could not find her. Someone said she had gone with the mahout’s family. But there was no way we could trace her,” recalled Chaitra. Riven by poverty, she did not file a police complaint.

Anjali, who was just nine-years-old then, travelled to Kerala with the mahout’s family where she worked as a domestic help for some years before marrying Nellamani Saji, a small time artist. After her marriage, she shared the story of her roots with Mr. Saji, who tried to contact people in Mudigere. With the help of friends in Kozhikode, got in touch with Monu, a social worker in Mudigere.

“Last week I received a call from my friend in Kozhikode. He told me about Nellamani Saji and his wife Anjali. They sought my help to trace Anjali’s mother in Mudigere,” said Mr. Monu.

With the help of his friends among estate owners in Mudigere, he traced Ms. Chaitra a couple of days ago. He then spoke to her and enquired about her daughter. “The information I had gathered from Anjali did match with what Chaitra told me. I took her picture and a video statement and sent them to Anjali on Monday. She immediately responded saying she was her mother,” said Mr. Monu.

Anjali, now herself a mother of three children, and Mr. Saji then travelled to Mudigere via Mangaluru on Tuesday and met Ms. Chaitra in the presence of Mr. Monu and other friends who helped make the reunion possible.

“I am happy I met my daughter after all these years,” said Ms. Chaitra who now lives alone after the death of her husband, with her other children having moved to other estates as workers.

The first thing that Anjali did after meeting her mother was to introduce her husband as it was his efforts that helped tracking down and re-uniting mother and daughter.