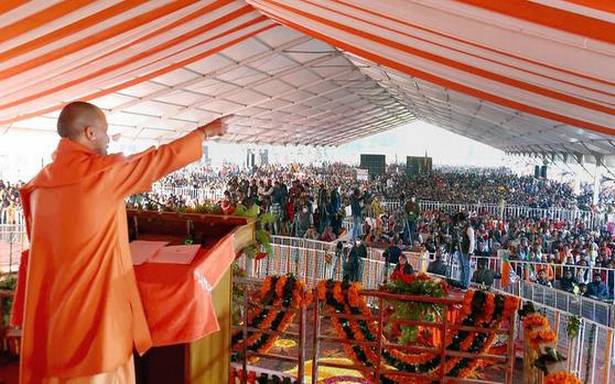 Sharpening his attack on the Samajwadi Party (SP), Uttar Pradesh Chief Minister Yogi Adityanath said on Tuesday, in a reference to SP chief Akhilesh Yadav’s recent comments, that those who were getting Lord Krishna in their dreams were forgetting that they had nurtured the demon Kansa in the past. “Those who fired at Ram bhakts are now promising to build the Ram temple in record time. They are putting chameleons to shame in changing colours,” he said.

On a spree to announce and inaugurate projects in the State before the forthcoming Assembly elections, Mr. Adityanath on Tuesday laid the foundation of an Anti-Terrorism Squad training centre in Deoband town of Saharanpur. “Previous governments wanted to withdraw cases against terrorists, we eliminate terror,” he said, adding the town will “get a new identity when commandos will come out of it”. Deoband is one of the most prominent centres of Islamic education in the world.

Once again linking the recovery of cash from a Kanpur businessman to the Samajwadi Party, Mr. Adityanath said the government’s heavy machinery was unearthing huge amounts of cash that used to be stashed behind walls during the previous government’s rule. “This stashed money was used during riots,” he charged. Such money, he said, was being used to provide one crore tablets and smartphones to students across the State.

Invoking the construction of the Ram temple in Ayodhya, and the Kashi Vishwanath temple corridor, Mr. Adityanath said, “The fight is between creativity and destruction, it is between nation builders and those who want to divide the nation.”

Taking a dig at SP chief Akhilesh Yadav for not making public appearances during the pandemic, Mr. Adityanath said, “He was missing for 20 of the last 22 months. I want to ask you, can a child who doesn’t go to school think of topping the class by attending school for a month before exams? We attended the classes.”

Mr. Adityanath rhetorically said that had the SP or the Congress been in power during the pandemic, their leadership would have left the country like the president of Afghanistan did during the Taliban’s takeover of that country.

Earlier, responding to Mr. Yadav’s statement in Lucknow, in which the SP president said that Lord Krishna came to him in his dreams every night and told him that the Samajwadis would bring “Ram Rajya” to the State, Mr. Adityanath retorted that Lord Krishna must be telling Mr. Yadav to wake up and see that the works that could not be done during the SP’s rule were being done under the Bharatiya Janata Party’s (BJP) rule.

“The Lord must be cursing him for not being able to do anything for Mathura, Vrindavan, Barsana, Gokul and Baldev, and how he managed to give birth to a Kansa who orchestrated the infamous Jawahar Bagh incident in Mathura,” Mr. Adityanath said. He was referring to the 2016 clash between the police and followers of Ram Vriksh Yadav in which two policemen, including a Superintendent of Police, and 24 squatters, were killed. “They are not concerned about Lord Krishna. They are followers of Kansa,” Mr. Adityanath said.

Accusing the SP government of its poor record on controlling riots, Mr. Adityanath said, “Now the State doesn’t indulge in danga (riot). Instead, it is focusing on ganna (sugarcane) production.”

Addressing the long-standing demand for the renovation of the Satha sugar mill in Aligarh, Mr. Adityanath promised a new sugar mill would replace it. “The process has started. In the last five years, we have paid ₹1,52,000 crore to sugarcane farmers for their crop.”