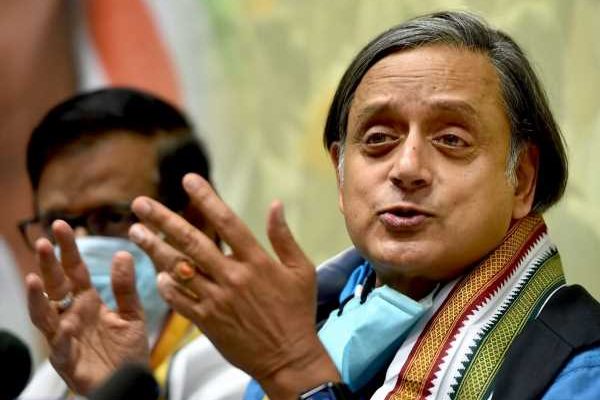 Amid a push for a population control policy by some Bharatiya Janata Party-ruled states, senior Congress leader Shashi Tharoor on Saturday alleged the BJP’s motive of raising the issue is political and aimed at targeting a ‘particular community’.

The former Union minister said the population debate is ‘utterly misplaced’ and half a century out-of-date as a large majority of Indian states have achieved replacement levels of fertility.

In an interview with PTI, Tharoor said the bigger challenge for India in the next 20 years will be to prepare for an ageing population, not a growing population.

He alleged the ruling party is raising this issue out of ‘thinly-concealed motivation’ to target a ‘particular community’.

“It is no accident that the three states where the government is talking about reducing population are UP (Uttar Pradesh), Assam and Lakshadweep, where everyone knows who their intended audience is,” the Lok Sabha MP from Thiruvananthapuram said.

“The Hindutva elements in our polity have not really studied the demographic issues. Their motive is purely political and communal,” he said when asked about the push for population control in UP and Assam.

Tharoor’s remarks come days after Uttar Pradesh’s draft population control bill was made public and the Assam government proposed formulation of a policy in this regard. Both states are ruled by the BJP.

The UP draft bill has provisions to debar people who have more than two children from the benefits of government schemes and proposes perks to those who follow the two-child policy.

Also, some BJP MPs are set to introduce private members’ bills on population control and uniform civil code in the upcoming Monsoon session of Parliament, according to information from the secretariats of both Houses.

The Monsoon session begins on July 19 and would conclude on August 13.

Asked about the upcoming Parliament session and the key issues the Congress and the Opposition would raise, Tharoor said the government has been ‘so colossally inept’ that there are multiple issues “we need to raise in the public interest’.

“The ineptitude of the government in its disastrous mismanagement of COVID, especially the blunder-laden vaccine policy; the continued failure to resolve the farmers’ agitation; the cratering economy, with GDP growth at its lowest in three decades,” he said listing the issues the Opposition needs to focus in Parliament.

He also referred to the ‘price rise caused by extortionate fuel taxes; the worst unemployment ever recorded’, the French investigation into corruption in the Rafale deal, the situation on the Sino-Indian border and the crisis in Afghanistan.

“And who knows what else may arise by Monday morning, given the government’s many unsavoury sins of omission and commission?” Tharoor said.

On disruptions rather than debate becoming the norm in Parliament, the 65-year-old Congress leader said it was well known that he has been opposed to disruptions in principle and prefers to debate the issues.

“But if you look at those disruptions in recent years that have been called by the Opposition, they have always been caused by the ruling party’s refusal to discuss a specific issue of burning national importance, which leaves the Opposition no choice but to draw attention to the issues the government wishes to avoid through disruption,” he said.

If debates were allowed, disruptions would be unnecessary, he asserted.

Tharoor urged the government to have the courage to debate any issue the Opposition wishes to raise.

“That’s what Parliament is for. The government prefers to treat it as a notice-board where they can just announce their laws and policies,” he said.

“If the ruling party treats Parliament with respect, which means agreeing to discuss the issues the Opposition raises and not just using their brute majority to push through the government’s agenda, I am sure the Opposition will reciprocate in kind,” he argued.

Asked whether the Afghanistan situation would also be a key issue to be raised in Parliament, Tharoor said, “Yes, that’s why I mentioned it along with China as the two external affairs issues that require discussion.”