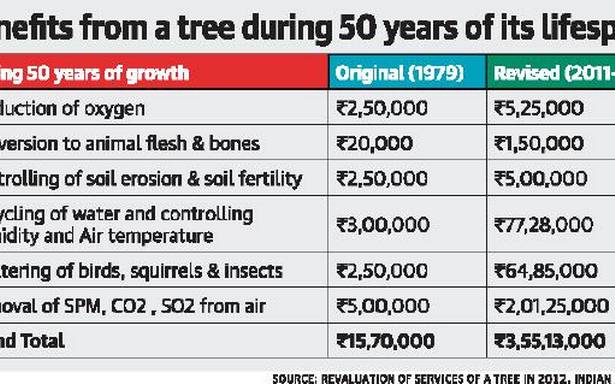 Despite standing guidelines and rules banning concretisation around trees in the Capital, callous civil works undertaken by the authorities have caused extensive damage to several trees on the pavements of Delhi.

One such activity of indiscriminate concretisation around trees in Vikas Marg area was brought up by environmentalists before the Delhi High Court, prompting it to issue contempt notices to the Delhi Government and other local bodies earlier this month.

Another petition was filed before the High Court by environmental activist Bhavreen Kandhari over the concretisation around 549 trees on the streets of Vasant Vihar, which is under the jurisdiction of the Public Works Department.

The High Court, noting that “preservation of fully grown trees is an absolute necessity especially because compensatory afforestation can never replace the lost green cover of a neighbourhood”, had directed the authorities to take appropriate action.

It had also observed that “compensatory afforestation ordinarily happens along the borders of NCT of Delhi, which would have no effect whatsoever on the affected neighbourhood, for almost two generations”.

Following the court’s warning, the authorities have acted swiftly and are in the process of removing concrete from around the affected trees in Vasant Vihar. However, environmental activists say this is an endemic problem across the city that needs better deterrence.

Advocate Aditya N. Prasad, who represented both petitioners — Neeraj Sharma (Vikas Marg case) and Ms. Kandhari — said there are a plethora of orders from the courts to keep areas around the tree trunk concrete-free.

He referred to the Delhi Preservation of Tree Act 1994, which puts restrictions on felling and removal of trees without the permission of the Tree Officer, Department of Forests. The law also made illegal tree felling a punishable offence with up to one-year imprisonment.

In 2000, the Urban Greening Guidelines came, which required one to leave six inches of areas un-cemented around the trunk of trees. This was increased by the National Green Tribunal (NGT) in 2013, when it ordered that the space around trees must be concrete-free by one metre. The NGT order came on a petition by Mr. Prasad and two of his friends, who were law students then.

C.R. Babu, professor emeritus at the Centre for Environmental Management of Degraded Ecosystem in Delhi University, said, “we need open space around a tree’s base, so that it is able to take nutrients, conserve the nutrients, [undergo] good aeration — all of which contribute to the good health of the trees.”

If the roots are not given breathing space, they will decay and easily get infested, Mr. Babu explained. He said if the areas around trees are covered by concrete during the rainy season, all the nutrients that come with the rain will remain on the surface.

“The nutrients around the trees need to be recycled, but if they get washed away due to concretisation, the trees will get nothing,” Mr. Babu said, adding “therefore, even one metre in cases is not adequate”.

“If we can have a two-metre wide opening around the roots of trees, that would promote the health of the trees,” Mr. Babu said, stressing further that there is a direct correlation between the longevity of trees and the open space around their roots.

Value of a tree

In 1979, a study published in the Indian Biologist by T.M. Das of Calcutta University pegged the value of a tree during its lifespan of 50 years at ₹15,70,000, calculated at the market rate that prevailed in 1979.

Over three decades later, Mr. Das re-evaluated all the calculations of the original papers as per the current market rate. For the study, a ‘Pipul’ tree, which grows luxuriantly with an average weightage of 6 tonnes was chosen. Mr. Das calculated the various environmental benefits received during its 50 years of growth at ₹3.55 crore. This estimation is also applicable to other tree species with identical tonnage, the study said.

While there is no dearth of rules and court orders banning concretisation around the trunk of trees, environment activist Ms. Kandhari said the problem arises when it comes to their implementation. “Firstly, why is the concretisation being allowed, whether it is residential, or footpath,” Ms. Bandhari asked.

She said sensitisation of the officials of local bodies such as the Public Works Department, municipal corporations, and police was important. “Secondly, they have to enforce the 2013 order of the NGT. If they are enforcing that, no trees will get concretised. And where the orders are violated, there should be strict action, so that people stop doing that.”