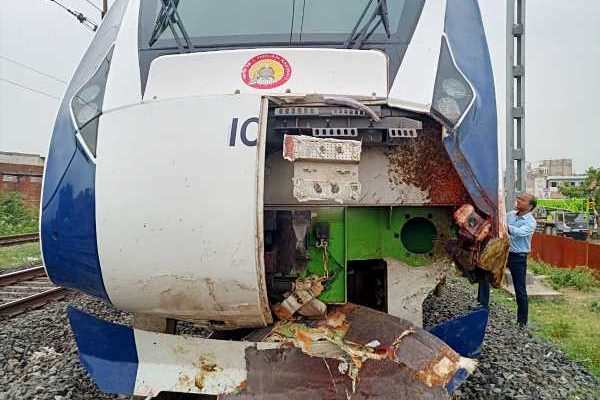 Experts suggest that a revamp in the surrounding infrastructure should take care of the issues plaguing the VB-2, stressing that the lightweight nature of the trains is what allows for higher speeds, and that needless design additions may hamper the train’s efficiency.
Dhruvaksh Saha reports.

The Gandhinagar-Mumbai Vande Bharat (VB) Express needed a facelift twice in two days, barely a week after it was inaugurated by Prime Minister Narendra Modi.

The Centre has hailed the VB trains as the future of rail mobility, but successive cattle hits and technical snags are beginning to dent the claim.

A VB Express train ran over cattle on October 6 and 7 between Gujarat and Maharashtra.

While such cases are common, trains getting damaged in the process is a rarity.

The Twitter handle of the Indian National Congress posted photos of an incident, pointing out that the train was inaugurated by the PM just six days earlier.

‘The train was detained for 10 minutes at the site but reached Gandhinagar on time. Vital parts of the train remained unaffected from the impact. Due to the hit, the nose cone cover of the front coach was damaged with its mounting brackets. The nose cover is designed to absorb the impact without transmitting the same to the functional parts of the train. Therefore, it is sacrificial by design and hence replaceable,’ Western Railway said in a statement.

Union Minister Ashwini Vaishnaw also clarified that until elevated rail tracks were in place, the collisions would continue.

‘The trains will run at a speed of 120, 130, 160 kmph and a collision is inevitable. It is a matter of common sense and design. Therefore, design it in such a way that you can mend it whenever there is such an incident,’ Vaishnaw was quoted saying at an interaction with engineering students, after the two incidents of collision with cattle.

A day later, the New Delhi-Varanasi VB Express was rendered out of order after it suffered a snag, causing a ‘flat tyre’ and jamming its wheels.

Nose panel made of fibre-reinforced plastic

Oct 6: Front panel of Gandhinagar-Mumbai Vande Bharat Express was damaged and had to be removed after the train hit four buffaloes near Ahmedabad

Oct 8: New Delhi-Varanasi Vande Bharat Express carrying 1,068 passengers came to a halt after a bearing defect in a traction motor; passengers shifted to another train.

Questions over the damages

Given that cattle getting hit by trains on track is a regular feature and the significant damage caused to the nose of VB trains, the Indian Railways is planning to keep spares.

Railways officials have cited the design of the latest VB trains as the reason for the impact on the nose cones.

The current VB-2 is an upgraded ‘lightweight’ version of VB-1, and is much faster than its predecessor.

It is 38 tonnes lighter than VB-1 (430 tonnes) and the nose of the train is made of fibre-reinforced plastic.

“Building the front with stronger materials would have caused more damage to the train, as the impact would have transmitted instead of breaking away with the nose. Unlike some trains, VB’s locomotives and coaches are not separate. Therefore, the nose cone serves as a disposable bumper that ensures operational parts remain safe from collisions,” a senior railways official said.

Soon after, the ministry of railways issued a tender for two additional sets of nose cones for Vande Bharat, this paper has learnt. The Railways is anticipating more accidents until the tracks are fenced.

Beyond the stopgap measure of spare cones, the Indian Railways is also reportedly planning to put fences along the railway tracks on VB routes to avoid the accidents.

“Across the world, fencing is done as an effective countermeasure to cattle collision. Once the train speeds past 120-130 kmph, fencing is necessary to avoid safety incidents, even more so as the railways modernises to high-speed rail (bullet train). Apart from that, the only option is to elevate the tracks, which may not be financially feasible,” said Vijay Dutt, former additional member of the Railway Board.

With railway tracks passing through grazing lands, farms, and unplanned or illegal residential establishments, there are concerns over the practicality of fencing the entire network of tracks.

Another former senior official said that fencing would only work if alternatives were given to people for safer cross-track mobility, such as rail over/underbridges (ROBs/RUBs).

“Even with level crossings, safety incidents remain. The railways has identified that ROBs and RUBs are necessary to eliminate level crossings and is working towards that. The only need is to expedite work so that fencing can be done properly as faster trains get added to the railway stock,” he said.

In 2022-23, the railways has so far eliminated 213 manned level crossings and built 250 ROBs/RUBs. It has said that there are no more unmanned crossings on its broad-gauge network. Its target is to eliminate 1,000 level crossings this financial year.

Experts suggest that a revamp in the surrounding infrastructure should take care of the issues plaguing the VB-2, stressing that the lightweight nature of the trains is what allows for higher speeds, and that needless design additions may hamper the train’s efficiency.