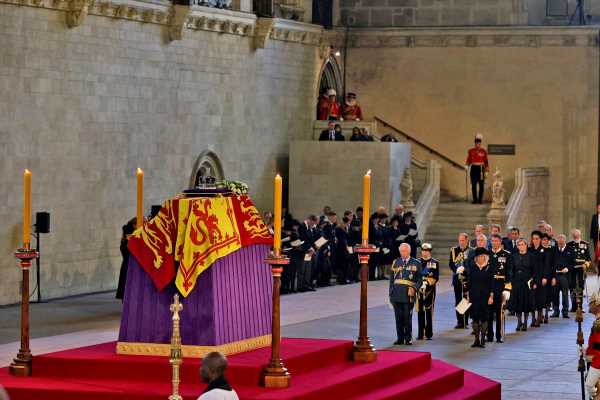 The United Kingdom has refused permission for a high-level Chinese government delegation to attend Queen Elizabeth’s Lying-in-State at Westminster Hall within the Parliament complex before the funeral at Westminster Abbey in London on September 19, according to UK media reports on Friday.

House of Commons Speaker Sir Lindsay Hoyle is said to have refused a request for access to Westminster Hall due to Chinese sanctions against five British members of Parliament and two peers for accusing Beijing of mistreating its Uighur Muslim minority in Xinjiang, Politico and the BBC have reported.

While the House of Commons said it did not comment on security matters, the media reports claimed that China would have a presence at the funeral but not be allowed into the Parliament building.

As Westminster Hall forms part of the parliamentary estate, it is under the control of the Commons and the Lords Speakers. The move is likely to further strain UK-China relations, which have been under some pressure in recent times.

According to reports, the UK Foreign, Commonwealth and Development Office has invited Chinese President Xi Jinping as Head of State of a country with which the UK has diplomatic relations.

It is thought that the vice-president, Wang Qishan, will be sent in his place along with a Chinese delegation.

The latest development comes after the sanctioned MPs had raised objections about the Chinese President being invited to the funeral at all.

In March last year, China had sanctioned nine individuals and four organisations in the UK in retaliation after Britain imposed sanctions on Chinese officials for alleged human rights abuses in its Xinjiang province.

Sir Iain Duncan Smith, the former leader of the Conservative Party, as well as Tory MPs Tom Tugendhat, Neil O’Brien, Tim Loughton and Nusrat Ghani are among those sanctioned as they and their families were banned from entering Chinese territory.

“You cannot have a Golden Age, normal relations, with a country that has now been exposed as committing the sorts of atrocities it has, not least the genocide against the Uighurs, the oppression going on in Tibet for the last 60/70 years, and now what we see going on in Hong Kong as well,” Loughton told the BBC.

The sanctioned MPs had sent a letter to the Parliament Speakers earlier this week to seek assurances that representatives from Beijing would not be allowed onto the parliamentary estate. They had also raised objections in a letter to the Foreign Secretary, James Cleverly.

Downing Street has said that it is a convention that countries with which the UK has diplomatic relations should be invited to state funerals. Three national governments have not been invited to the state funeral of Queen Elizabeth II over the ongoing war in Ukraine – Russia, Belarus and Myanmar.

China has detained Uighurs at camps in the north-west region of Xinjiang, where allegations of torture, forced labour and sexual abuse have emerged. China has rejected those charges.