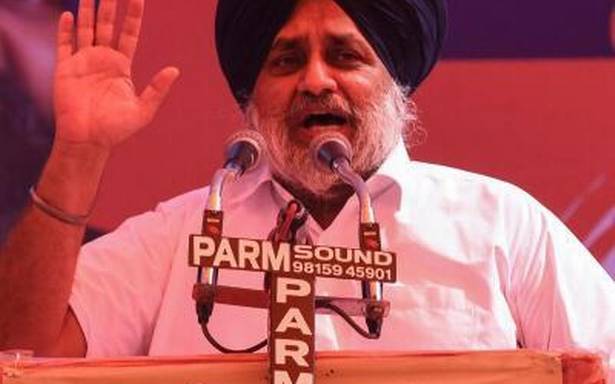 It demands special Assembly session to discuss ‘complete mismanagement’ of the situation.

Shiromani Akali Dal (SAD) president Sukhbir Singh Badal on Wednesday demanded the Congress government provide financial package to the industry for the losses suffered by it on account of forced shutdown amid the ongoing power crises.

Mr. Badal said after suffering huge losses due to the COVID lockdown in the last one and a half years, the sector was presently in the grip of a “power lockdown” with the government imposing a three-day compulsory off, closing down large-scale industries for five days and reducing contracted power load of continuous supply to industry by 50%.

“This has broken the back of the industry which is suffering losses of worth crores of rupees on a daily basis besides losing orders,” said Mr. Badal, holding Chief Minister (Retd.) Captain Amarinder Singh responsible for the state of affairs.

He said collection of bills for the current cycle be deferred by two months for the sector. “Power should also be provided at a landing cost of ₹5 per unit as promised by the Chief Minister,” he said, adding that the industry was paying nearly ₹10 per unit.

Mr. Badal also demanded a special session of the Assembly to discuss the complete mismanagement of the situation. He said the Punjab State Power Corporation Limited (PSPCL), which had been declared as the best electricity utility in 2015 during the SAD government led tenure, was now finding it difficult to even supply adequate power to the consumers.

“Mismanagement and the Congress government’s failure to add a single mega watt in the last four and a half years has led to a situation where farmers are not getting adequate supply for their paddy crop even as unscheduled power cuts are being imposed on domestic consumers. The Chief Minister owes an explanation to Punjabis as to how a power surplus state during SAD tenure has become deficient and unable to even distribute power to consumers due to lack of maintenance of the transmission and distribution system,” he said.