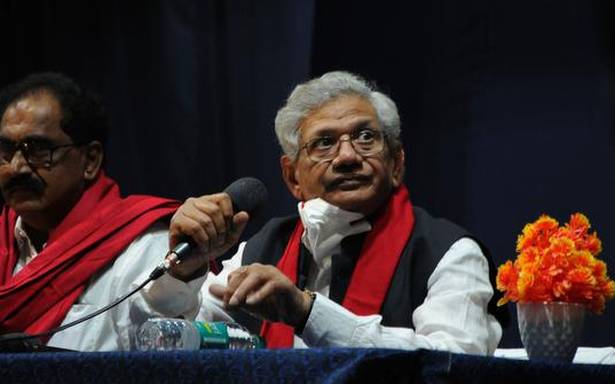 Asserting that it will continue its efforts to maximise pooling of votes against the Bharatiya Janata Party in the coming elections to five States, the Communist Party of India (Marxist) has said its primary task is to ensure the defeat of the BJP in these States.

The party has requested the Election Commission of India to be vigilant as the BJP could resort to “all sorts of measures to pressurise and intimidate people” for electoral gains. The EC should strictly implement the Model Code of Conduct and bring to book everyone, including the Prime Minister, found guilty of violation of the MCC.

“The BJP is facing certain defeat in the major States that are going to polls. There is huge anti-incumbency in Uttarakhand and the situation is no better in Punjab. The party is resorting to rabid communal polarisation in Uttar Pradesh as can be seen from the hate speeches in Dharam Sansad where some leaders called for civil war,” CPI (M) general secretary Sitaram Yechury said.

Mr. Yechury spoke to reporters on Sunday after the conclusion of the party’s three-day central committee meeting to finalise the draft political resolution ahead of the party’s 23rd national congress slated in Kannur in Kerala from April 6 to 10. He expressed concern that the BJP had invited another tranche of electoral bonds at a time when five States were going to elections. “More than 80 per cent of this money will be utilised to finance the electoral campaign costs of the BJP. The EC should be vigilant to protect the interests of the other political parties,” he said.

The election authority should take steps to ensure that there was level playing field for every contestant as the EC could not fulfil its constitutional duties without taking steps in this direction. “The EC should not be lax in the implementation of MCC and other measures,” he said.

Asked what would be the CPI (M)’s course in these States, he said the party would take its stand State-wise based on the level of influence exercised by the regional parties in the respective States. “We will support Samajwadi Party in Uttar Pradesh as it is prime contender against the BJP. It is for the Samajwadi Party to make proposals relating to seat sharing and related issues,” he said.

On the strategy that would be adopted at the national level, he said formation of a front against the BJP would be possible after the elections. He cited the experiences in 1996, 1998 and 2004 when the United Front, National Democratic Alliance and the UPA were formed after the elections. “No pre-election fronts have succeeded in the country going by the experiences,” he said.

Responding to a query on breach in the Prime Minister’s security at Ferozepur, the CPI (M) general secretary said the Prime Minister could have taken an aerial route rather than going by road. “Nevertheless, security lapses should be seriously looked into and appropriate action should be initiated once the report is out,” he said.