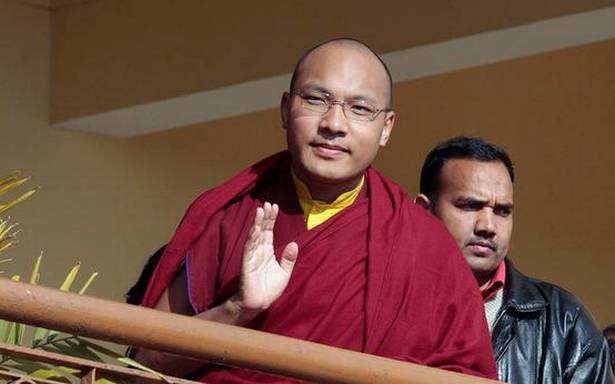 The ongoing discussion in the Tibetan and Indian quarters about the Dalai Lama succession plan has brought the spotlight back on the 17th Karmapa, Ugyen Trinley Dorje, who has been based in the U.S. since 2017. Sikkim Chief Minister Prem Singh Tamang informed in August that India was “positively considering” the return of the Karmapa from the U.S. He claimed the initiative was blessed by the Dalai Lama.

Presence of the Karmapa in India is increasingly being viewed as a necessary component for ensuring a smooth deliberation to determine the next Dalai Lama. The current Dalai Lama who has been residing in Dharmasala has not travelled abroad for some time because of the ongoing pandemic though he has been meeting guests, including RSS chief Mohan Bhagwat recently. There have been frequent health concerns over the octogenarian, who is the undisputed spiritual leader of the Tibetan community.

In March 2011, the Dalai Lama handed over political power to Lobsang Sangay who took over as the first Kalon Tripa or political leader. He, however, did not leave the spiritual authority that can only be transferred following his physical demise through a complex process of selection of a successor that involves reincarnation and subsequent examination of the reincarnated Dalai Lama.

Tibet observers say that the Karmapa’s opinion will be crucial in the entire process that will determine the discovery of the next Dalai Lama. However, of greater significance is the fact that the Karmapa, who has his traditional seat at the Rumtek monastery of Sikkim, is the second highest Tibetan spiritual leader because of the importance of his rank and the Rumtek monastery. Indian experts consider the selection of the next Dalai Lama is a “highly sensitive” issue as it involves power play among various Buddhist monasteries, India, China and the Tibetans spread across the world.

Dalai Lama has himself spoken that his successor could be a woman. However, the spiritual process of finding the reincarnated soul and verification of that soul as the true inheritor is a long-drawn development that may take at least five years. According to an expert on Himalayan Buddhism who requested anonymity, even after a smooth authentication process, the “emergence” of the properly trained next Dalai Lama may take at least 25 years, during which the seat of the spiritual guide of the Tibetan people will have to be occupied by someone. In these circumstances, the Karmapa may be called upon to provide leadership to a large number Tibetans across the world during those years till the next Dalai Lama becomes ready to take over.

The position of the Karmapa has been contested between two – Ugyen Trinley Dorjey and Thaye Dorjey. But out of the two, the former found ready recognition from the Tibetans and the Rumtek community in Sikkim because of the blessing that the Dalai Lama bestowed upon him during his childhood enthronement in the Tsurpu monastery of Tibet. Ugyen Trinley Dorjey staged an adventurous escape from Tibet in 1999 at the age of 14 and acquired fame among the Tibetan community.

Ever since, however, he has courted several controversies that was followed in 2017 with his departure from India to the U.S. One of his key demands had been that India should allow him to travel abroad freely and provide him necessary papers for that. His followers from the Karma Kagyu school of Buddhism have been insisting that he should be brought back to Dharamsala or Rumtek where he can take charge of his order. However, the Karmapa’s arrival in Sikkim is also contingent upon the factions within the Rumtek as well as the old Buddhist aristocracy of Sikkim where the distant relatives of the erstwhile royals– the Chogyal – are also expected to play a role. The process may also include individuals from Bhutan and Nepal, indicating the complexity.