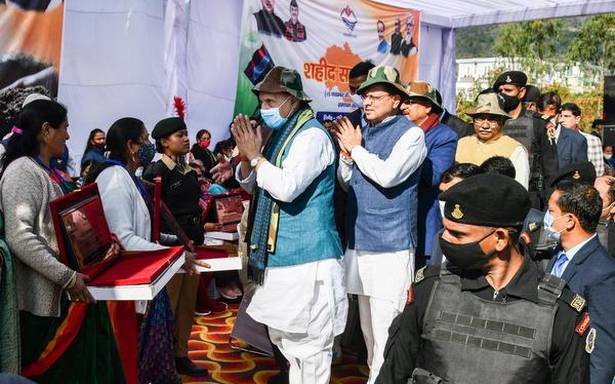 The programme held at Guniyalgaon also marked the conclusion of the Uttarakhand government’s ‘Shaheed Samman Yatra’.

Defence Minister Rajnath Singh on December 15 laid the foundation stone at the ground breaking ceremony of the ‘Sainya Dham’ in Dehradun and said it is a big step towards honouring the spirit of pride in one’s nation that motivates people to make the supreme sacrifice for their country.

The programme held at Guniyalgaon also marked the conclusion of the Uttarakhand government’s ‘Shaheed Samman Yatra’, which was conducted throughout the State to collect soil from the homes of 1,734 martyrs.

The soil will be used in the construction of the ‘Sainya Dham’ [martyrs’ memorial], which was conceived by Prime Minister Narendra Modi as the fifth dham after the char dhams of Badrinath, Kedarnath, Yamunotri and Gangotri.

Describing Uttarakhand as the “land of bravehearts”, Mr. Singh said the country’s first Chief of Defence Staff General Bipin Rawat was one such braveheart from the State who remained true to his duties till the very end.

“Gen Rawat will remain alive in people’s hearts forever,” he said. The general, his wife and other defence personnel died in a helicopter crash in Tamil Nadu on December 8.

Praising the idea behind collecting soil from martyrs’ homes for building the memorial, Mr. Singh said he had applied some of it to his forehead out of a feeling of respect for martyrs.

“This is the same soil that our martyrs must have walked on as toddlers in their courtyards from where it has been brought. I have applied some to my forehead as respect to them,” he said.

Congratulating the State government for the ‘Shaheed Samman Yatra’, he said work on the memorial project should be started without delay.

“I would suggest that the memorial should be built without delay with the names of martyrs and their villages clearly inscribed on its walls. I am confident that whoever comes to visit ‘Sainya Dham’ will return with the inspiration of doing something for their country,” the Defence Minister said.

Defining a martyr, Mr. Singh said a martyr has a big heart filled with pride in one’s nation and cited the names of freedom fighters such as Chadrashekhar Azad and Ashwaq Ullah Khan.

He also said Prime Minister Modi’s inspiration was behind the Sainya Dham project.

The Minister also praised Mr. Modi for restoring ancient temples such as Somnath, Kedarnath, Ram Mandir in Ayodhya and Kashi-Vsihwanath Dham to their lost glory, saying he was doing all this because he does not want India to lose its cultural roots.