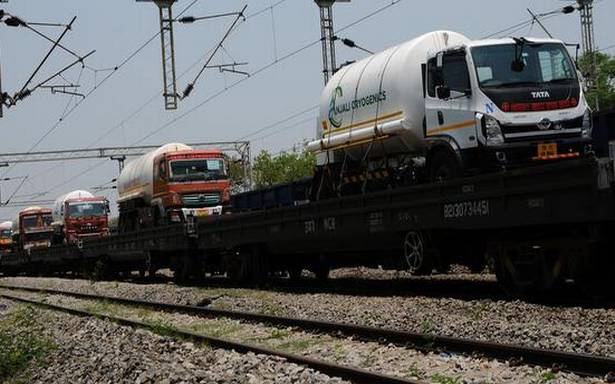 Two oxygen expresses on their way from Hapa and Mundra

Delhi would receive 244 metric tonnes (MT) more of oxygen on Tuesday, the Ministry of Railways said in a statement.

Two oxygen expresses, carrying over 244 MT of liquid medical oxygen were on their way from Hapa and Mundra and they were expected to reach Delhi on Tuesday, it said.

“With the arrival of two more oxygen expresses today, Delhi would see nearly 450MT of LMO in 24 hours beginning early hours to 4th May. Of the total 382 MT of LMO being delivered today by Railways, nearly 244 MT would be meant for Delhi, which is nearly 64% of total load being delivered today,” it said.

In addition, Telangana received its second oxygen express from Angul, carrying 60.23 MT LMO and Lucknow would receive 79 MT from Bokaro on Tuesday, it stated.

So far, 103 tankers have been delivered to the States and 33 more tankers were on their way.

“It is Indian Railways’ endeavour to deliver as much LMO as possible in the shortest time possible to the requesting states,” it said.