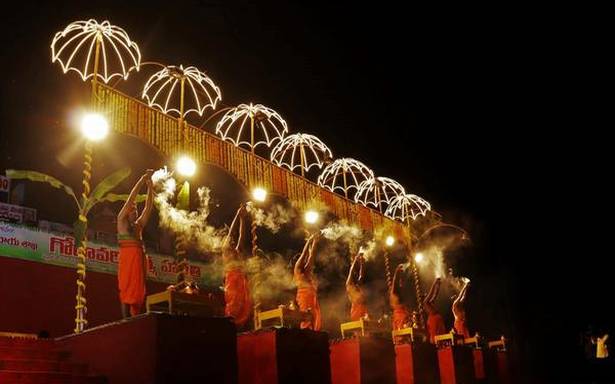 ‘The ritual, stopped during the lockdown, will continue throughout the year’

Devotees have been thronging Rajamahendravaram to witness the Godavari Nitya Harathi ritual during the ongoing Dasara festival.

The ritual, which was stopped during the COVID-19 lockdown, was resumed on October 7. As part of the ritual, a group of priests have been offering prayers to the Godavari at the Pushkar Ghat in the city.

Authorities of Sri Veera Venkata Satyanarayana Swamivari Devasthanam, Annavaram, are now funding the ritual till October 15. The State government had started the ritual during the Godavari Pushkaram in 2015. The cultural performances including Kuchipudi dance performances, are the prime attractions at the Pushkar Ghat.

“The Godavari Nitya Haarathi will be an integral part of the cultural life of Rajamahendravaram. The ritual will continue throughout the year to attract tourists,” said Rajamahendravaram MP Margani Bharat. Mr. Bharat said that the efforts were on to declare Rajamahendravaram as the heritage city of India as it is known as Dakshin Kasi. “We have invited all the public representatives and people from different walks of life to attend the ritual during the Dasara festival to show them the cultural heritage of the city,” said Mr. Bharat, who launched the harathi on October 7.