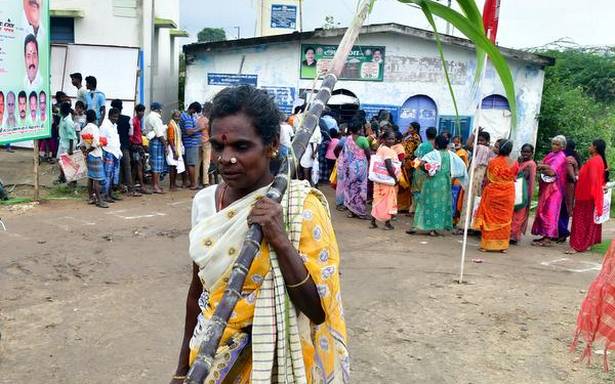 They insist on officials distributing tokens to cardholders

Uneasy calm prevailed for some time in front of a few ration shops in the temple town on Monday as the AIADMK and DMK men indulged in a wordy altercation as the salesmen were ready to distribute the Pongal gifts.

The State government had announced to give ₹ 2500 cash as Pongal gift along with a sugarcane, a kilogram of rice, sugar, cashew and others to every rice cardholder beginning from January 4.

The DMK opposed AIADMK men issuing tokens and objected to it. They had insisted on the officials to give away the tokens to the cardholders.

Under such circumstances, the AIADMK men had put up huge banners and party flags near the ration shops welcoming the public and thanking the Chief Minister Edappadi K Palaniswami and others.

Irked, the DMK men led by town secretary Tamilmani objected to the AIADMK’s flags and demanded that it be removed first. On information, the AIADMK town secretary Muruganandam arrived. There were wordy altercations between the two sides.

As the situation looked like a free for all, the police intervened and held talks.

After much persuasion, they made the AIADMK men remove the flags following which the DMK functionaries left the spot.

Though the district administration had claimed that they have issued tokens to 100 persons to collect the Pongal gift in the forenoon and another 100 tokens in the afternoon, long queues revealed that the officials had not issued tokens to every cardholder.

An official, however, maintained that people, out of anxiety, turned up before the shops, though it was not their turn. " We will strictly ensure that only those numbers mentioned were present," the official added.

In Ramanathapuram, Collector Dinesh Ponraj Oliver visited two of the ration shops in Ramnad Town and at Keelakarai on Monday to oversee the distribution of the Pongal gift.

In the presence of the AIADMK MLA Manikandan, the Pongal gift was distributed to the beneficiaries. According to an official, the district had 3,73,325 rice cardholders and a total of ₹ 93.33 crore would be distributed to them along with the rice and sugar in the next week.

The officials said that they had issued tokens and with the covid-19 pandemic, the district administration, in coordination with the police and TNCSC officials, had given the guidelines.

With the cooperation from the cardholders, the Collector hoped the process would be completed hassle-free. He appealed to the cardholders to be rest assured of the gifts and there need not be any panic or anxiety.

In Theni district, an official said that out of 4,08,385 cardholders, on the first day, 64,282 people received the Pongal gift and the hampers. The district administration had instructed the ration shop salesman in all the 517 shops to issue tokens and accordingly give away the gifts. On the first day, 15.72 % of cardholders had collected and the exercise would continue during this week, he added.

Khadi and Village Industries Minister G Baskaran distributed the Pongal gifts to the cardholders in the district in the presence of the AIADMK functionaries. Collector P Madhusudhan Reddy presided.

According to the officials, till January 13, the distribution of the hampers would go on in all the ration shops. The district has 4,01,218 card holders. The government had earmarked sufficient funds and the hamper kit was also despatched to the shops concerned.

The public need not crowd in front of the shops and they repeatedly assured that all the eligible card holders would get the hampers well before the Pongal festival.