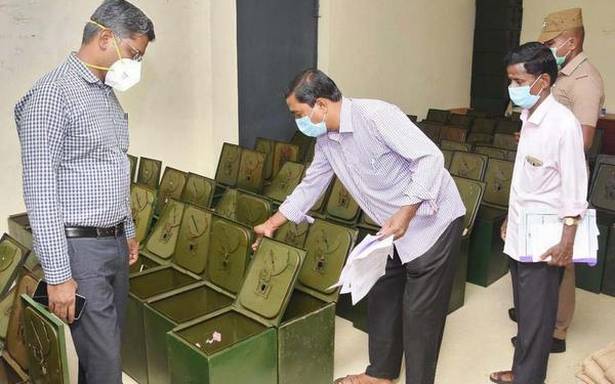 According to Collector P. N. Sridhar, elections are being held for 1,924 posts and as many as 5,717 are in fray in the district.

Elaborate arrangements have been made for the smooth conduct of the first phase of rural local body polls in the district on October 6.

The arrangements being made for the local body polls include deployment of 1,800 police personnel for law and order duty on the polling day on October 6 and posting of over 6,511 government employees including 207 zonal officers for election duty at 939 polling booths across the district.

According to Collector P. N. Sridhar, elections are being held for 1,924 posts and as many as 5,717 are in fray in the district. Mr. Sridhar said that the four panchayat unions in the district had been divided into 69 zones and arrangements made to despatch polling materials to the booths.

Superintendent of Police Ziaul Haque said the Police Department had made elaborate security arrangements to ensure hassle-free, free and fair polling in the district. Over 1,800 police personnel had been deployed for security on polling day. The Department had also deployed six mobile parties and posted 27 police pickets across the district for polling. The patroling units would cover all the polling stations.