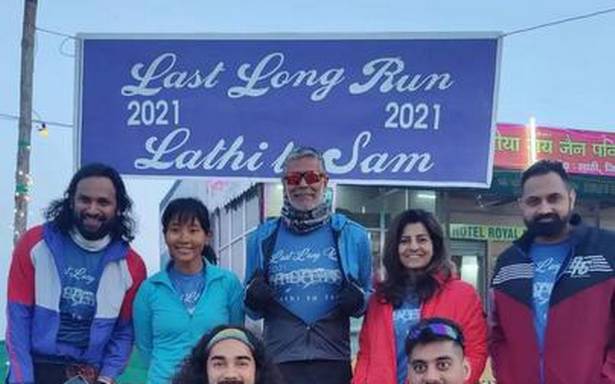 As in the previous years, the run is led by model-actor Milind Soman to celebrate health and the new year to come. Eight runners from various cities participated in the two-day event that covered around 110-km from Lathi to Sam in Rajasthan. Jai is the only representative from Chennai.

“When you have a group of like-minded people with you the endurance levels are high,” says Jai, an undergraduate student of social work at Hindustan College of Arts and Science.

“We ran 45 kilometres today and 62 km on December 30 with the former being more challenging as the road was narrow and the speeding vehicles forced us to run on the uneven surface,” says Jai, who was also part of the two-day run held last year that was from Guwahati to Cherrapunji.

The group started their run around 7.30 a.m. taking a short break of 10-15 minutes every 15 km and winding up before sunset. En route they stop to interact with groups. The messages written in Hindi and English on their t-shirts also do the talking for them.

What is the kind of preparation that goes into the run? As a member of Chennai Runners Kilpauk Striders, Jai says the group has been his biggest strength. “I run thrice a week and Sundays are meant for long runs,” says the cycling and swimming enthusiast.

Just before starting to train for the event, in the first week of November, Jai met with a freak accident near Chetpet Eco Park injuring a knee and left elbow. “That was a big blow as I needed at least two months of rigorous training before the Last Long Run 2021 but the doctor advised me bed rest for three weeks,” Jai says he had also put on weight.

He says every run throws up its own set of challenges. Last year, the surface had an incline and they even had to climb hills. “This time, we did not have any such difficulties but my shoes gave me trouble. I had carried two pairs but the second pair I had only used for a few days so after 30 km my feet developed blisters. A lesson learnt: for long-distance runs make sure to wear shoes that have been used well, at least for a few months,” says Jai, who is ambassador of the Born To Win Research Foundation Trust. One advice he will always remember from Milind Soman is “never give up whatever be the situation”. Bharatiya Sindhi Welfare Association sponsored Jai’s trip.