Originally, Crew-1 did plan to come back during the day on Wednesday last week, but the return kept getting postponed due to bad weather. 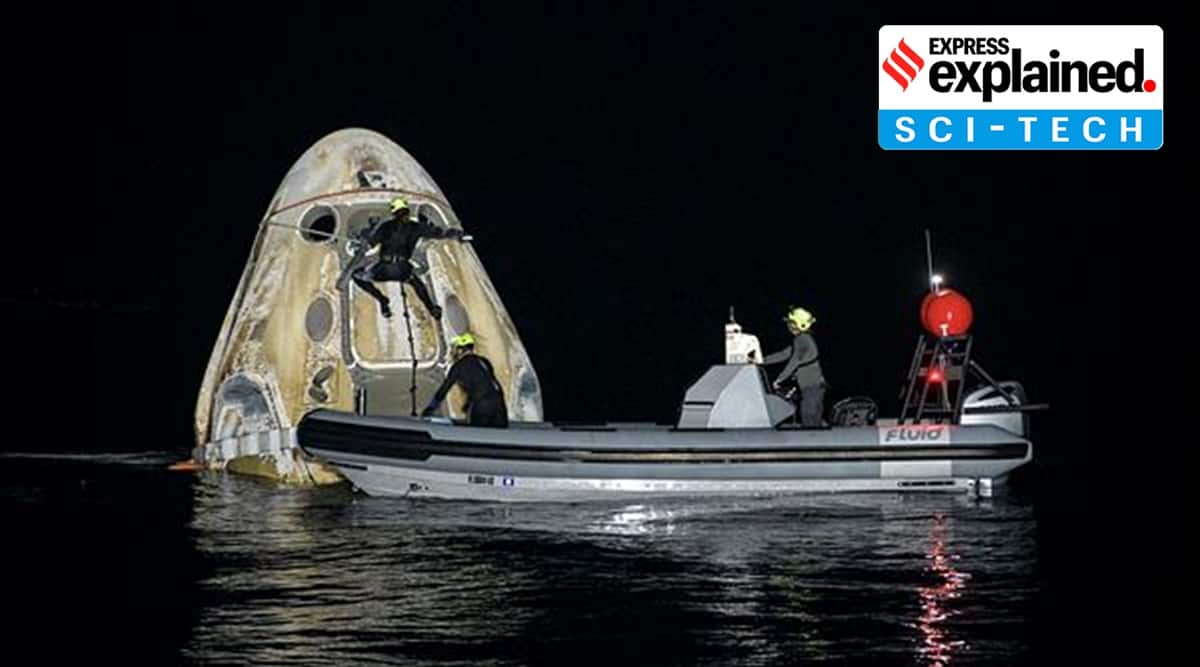 Elon Musk’s SpaceX marked the successful completion of its Crew-1 mission for NASA in the early hours of Sunday, as its Crew Dragon spacecraft brought back to the Earth four astronauts from the International Space Station (ISS), landing on water in the Gulf of Mexico off the coast of Florida.

The capsule, called Resilience, had taken off for the ISS in November, carrying the same four Crew-1 astronauts– three from the US and one from Japan– who came back Sunday. Their arrival at just before 3 AM on Sunday after almost six months in space marks the completion of the first operational mission by SpaceX for the US agency.

This ISS –which is continuously inhabited– now has seven people left. Four of these arrived there last week, also via SpaceX aboard its Crew-2 mission.

In May 2020, NASA’s SpaceX Demo-2 test flight lifted off for the ISS carrying two astronauts and splashed down on the Gulf of Mexico in August. The aim of this test flight was to see if SpaceX capsules could be used on a regular basis to ferry astronauts to and from the ISS.

After the success of Demo-2, Crew-1 was launched in November as the first of six crewed missions between NASA and SpaceX, marking the beginning of a new era in the US for space travel.

Starting mid-November 2020, Crew-1 team members joined members of Expedition 64 and conducted microgravity studies at the ISS. Some of the research that the crew carried with themselves included materials to investigate food physiology meant to study the effects of dietary improvements on immune function and the gut microbiome and how those improvements can help crews adapt to spaceflight.

Space pods can safely return to Earth by landing on either the ground or water.

The last US mission to land astronauts to land on water in the dark was the historic Apollo 8, the first human spaceflight to reach and orbit the Moon in 1968. The spacecraft spent six days in space before splashing into the Pacific Ocean near Hawaii before dawn on December 27 that year.

Apart from Apollo, NASA’s Mercury and Gemini capsules also made sea landings during the 1960s.

In contrast, Soviet capsules would end their journeys on land– a technique that continues to be followed by today’s Russia, whose Soyuz capsules make ground landings. China’s Shenzhou capsules do the same.

Although SpaceX had originally planned for the Crew Dragon to land on the ground, it later switched to water landings as the company said it made the designing of the capsule simplified.

Boeing’s Starliner, the other capsule that NASA has ordered apart from SpaceX’s Crew Dragon, will be making ground landings in New Mexico. The delayed pod is expected to become operational early next year.

How landing at night can help

Originally, Crew-1 did plan to come back during the day on Wednesday last week, but the return kept getting postponed due to bad weather.

So, NASA switched to landing at night, listing calm nighttime weather and ample moonlight as factors influencing its decision. Fortunately for the space agency, SpaceX had also rehearsed landing at night, and in January this year the company was able to land on water a station cargo capsule.

An additional advantage of landing in dark is avoiding disturbance from private boats, a safety risk. When the Demo-2 spacecraft splashed in August last year, more than a dozen pleasure boaters had converged on the pod to take a closer look.

According to the New York Times, to avoid such problems, the US Coast Guard this time also set up an 11.5-mile safety zone to chase away any boats or helicopters– which worked.

Moments before Crew-1 reached Earth, SpaceX’s Mission Control radioed, “We welcome you back to planet Earth and thanks for flying SpaceX.”

“For those of you enrolled in our frequent flyer program, you’ve earned 68 million miles on this voyage.”

To which spacecraft commander Mike Hopkins replied, “It is good to be back on planet Earth. We’ll take those miles. Are they transferrable?”