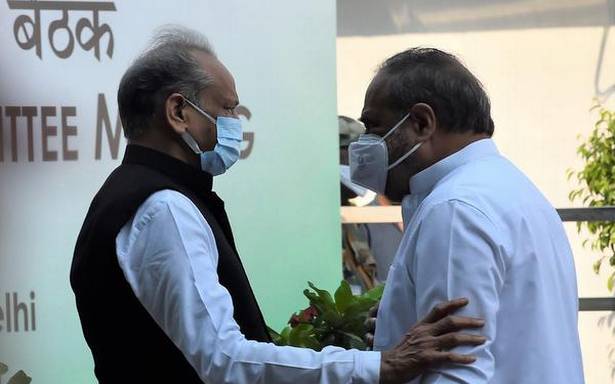 He visits Delhi after seven months to attend CWC meeting

Rajasthan Chief Minister Ashok Gehlot’s visit to New Delhi to attend the Congress Working Committee (CWC) meeting on Saturday has sparked a speculation about its ramifications for the State’s politics. All eyes are on Cabinet expansion and reshuffle as well as political appointments here, which have been inordinately delayed.

Congress president Sonia Gandhi’s assertion at the CWC meeting that she was a “full-time, hands-on” party chief is likely to make an impact on the prospects for Mr. Gehlot, who has so far been unwilling to agree to a power-sharing arrangement with the rival faction, riding on the support of the majority of the ruling party and Independent MLAs.

The camps led by Mr. Gehlot and his former deputy, Sachin Pilot, have been at loggerheads for more than a year, though the recent turmoil in Punjab had led to the hopes of an early settlement of the issues raised by the latter during his rebellion along with 18 MLAs in July last year. Party emissaries from New Delhi have been unable to convince Mr. Gehlot to carry out an early reshuffle, as he has refused to act under any pressure.

With Ms. Gandhi calling for “unity, discipline, self-control and keeping [the] party’s interest paramount”, the party’s State unit may also witness the changes that were promised after the appointment of Minister of State Govind Singh Dotasra as the pradesh Congress president. The party’s district and block units have been functioning without the full strength of office-bearers for quite some time.

While Mr. Gehlot is visiting New Delhi after a gap of seven months, the Cabinet reshuffle took a back seat after the announcement of dates for byelections to Vallabhnagar and Dhariawad Assembly seats, which will be held on October 30.

Mr. Pilot’s loyalists have built up pressure with the demand for early changes in the government.

Sources in the Pradesh Congress Committee said the party’s central leadership would discuss the political issues with Mr. Gehlot on the sidelines of the CWC meeting. He is believed to have discussed the State’s political situation with senior party leader Ambika Soni on Friday.

Mr. Gehlot holds as many as nine portfolios, including Home and Finance.

Besides Mr. Gehlot, CWC members from Rajasthan Raghveer Meena and Jitendra Singh, as well as Medical and Health Minister Raghu Sharma, who was recently appointed AICC in charge of Gujarat, Daman and Diu, and Dadra and Nagar Haveli, also attended the working committee meeting.