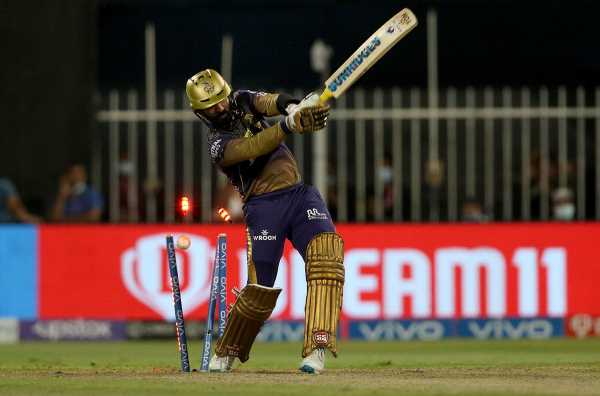 It turned out to be a narrow escape for Kolkata Knight Riders as they survived a shocking batting collapse to edge past Delhi Capitals in the IPL Qualifier 2 match in Sharjah on Wednesday, October 13, 2021.

Rahul Tripathi hit Delhi’s senior spinner Ravichandran Ashwin for a six to take KKR to a thrilling three-wicket victory with one ball to spare and set up the IPL 2021 final against Chennai Super Kings.

In the end, it was too close for comfort as KKR, one stage, looked to be cruising towards an easy victory.

Venkatesh Iyer continued his superb run with the bat, slamming his third half-century in the IPL’s second leg in the UAE.

Fully aware that scoring would be difficult in the middle overs, he made most of the Powerplay by going after the Delhi bowlers in the early overs.

Delhi paid dearly for their lapse in the field when Kagiso Rabada dropped an easy caught and bowled chance when Iyer was on 23, in the fifth over.

The batter smashed his way to 55 from 41 balls to give KKR a flying start. He put on 96 runs for the opening wicket with Shubman Gill, who made 46.

His dismissal to Rabada hardly evoked much excitement from the Delhi players as KKR were in complete control, needing 40 from 46 balls at that stage.

No 3 batter Nitish Rana got a reprieve early on when he was dropped by Ashwin at third man but he failed to make most of the reprieve and was caught in the deep off Anrich Nortje.

That wicket changed the course of the match completely.

KKR’s batsmen went into self-destruct mode as Delhi chipped away at the wickets. Gill fell in the next over, caught behind off Avesh Khan before Dinesh Karthik and Eoin Morgan fell in successive overs without scoring.

With seven needed from the final over, Delhi’s hopes were boosted further when Ashwin dismissed Shakib Al Hasan and Sunil Narine with back-to-back deliveries as KKR lost four batsmen in a row for ducks.

Just when it looked as if Delhi were set to snatch victory from the jaws of defeat, Tripathi dashed their hopes with a straight six off Ashwin’s fifth ball.

KKR will rue taking the match so deep as they nearly ended up losing it!