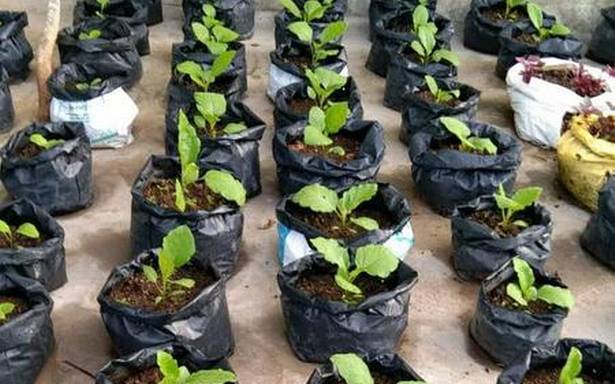 K.R. Gouri was Minister for Agriculture in 2001 when, at the Onam celebrations of the Udarasiromani Road Residents’ Association in the capital city, she saw terrace cultivation undertaken by association president and former director of the Farm Information Bureau T.K. Bhaskara Panicker.

That was a time when agriculture was mostly concentrated in rural areas and there was little cultivation happening in cities. But, inspired by Mr. Panicker, she hit upon the idea of implementing terrace cultivation on a larger scale in cities. Mr. Panicker’s produce was grown organically, and the results were there for her to see. Ditching chemical farming, Ms. Gouri decided to go the organic way.

Mr. Panicker then submitted the idea for ‘Nagarathil oru nattinpuram’ that was given the nod by the government. A meeting of select project beneficiaries was convened at her official residence and on the basis of their suggestions, the Agriculture Department was directed to draw up a project that promised technical and financial assistance for starting organic terrace cultivation in cities.

From Thiruvananthapuram city, the scheme was extended to four more cities. She monitored the special squads of the department set up to implement the project.

Agriculture Department Assistant Director Thomas Mammen supervised the project implementation, while Mr. Panicker was the project coordinator. Free seeds and manure were distributed through the department to residents’ associations via which the project was implemented.

“Only she could have done this. This was the time when chemical farming was rampant. Ms. Gouri created a revolution by switching to organic farming. She was the first to promote it. Today, governments have made organic cultivation a policy,” says 90-year-old Mr. Panicker.

It was owing to her efforts that the government recognised the scheme and allocated funds for it. “She was not only talk. She showed that it could be done. The project was received wholeheartedly by the people. Today, terrace cultivation has become widespread not only in urban areas but also in rural parts, and continues to increase. She also promoted organic composting of kitchen waste,” points out Mr. Panicker, a former president of the Federation of Residents’ Associations Thiruvananthapuram (FRAT).

Ms. Gouri directed the attention of the Agriculture Department from cultivation only in villages to that in cities and pioneered the idea of self-sufficiency in vegetable cultivation, a statement from FRAT said.

She also helped agriculture break free from the clutches of chemical and pesticide behemoths to make organic cultivation widely popular in the State, the statement added.