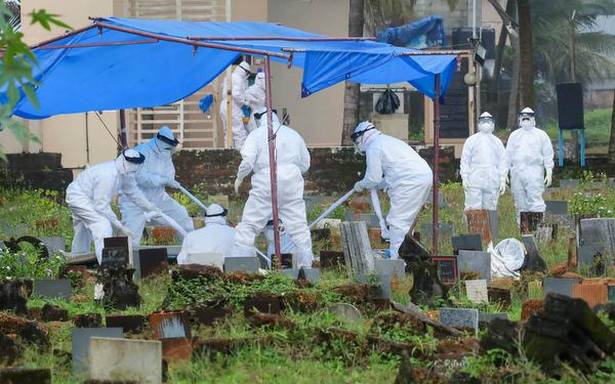 The survey was held in around 15,000 houses and involved around 68,000 persons, says Chief Minister Pinarayi Vijayan.

The Kerala government has conducted a complete house-to-house survey within 3-km-radius from the house of the 12-year-old boy who succumbed to Nipah virus on September 5 as part of is fever surveillance, Chief Minister Pinarayi Vijayan said on September 10.

He said in the survey around 15,000 houses were included from the containment zone and details were sought from around 68,000 persons.

“A house-to-house survey was conducted within a 3-km-radius from the house of the deceased child. The survey was held in around 15,000 houses and involved around 68,000 persons. The surveillance team sought details of any unusual fever or unnatural deaths in these areas,” Mr. Vijayan said, adding that no such cases were reported in the survey.

The Chief Minister said four mobile labs have been set up to conduct COVID-19/Nipah tests for those with mild symptoms detected during the house visit.

“The samples collected from bats and the fruit waste eaten by bats will be sent to Bhopal NIV. The field and fever surveillance is on,” he said.

The Chief Minister also added that those people with mild symptoms will be in room isolation for 21 days and the health workers will monitor their condition.

On September 9, Health minister Veena George said that 274 people were identified as being in the primary contact list of the victim and they were being observed.

Test results of 68 people who had come in close contact with the 12-year-old child who succumbed to Nipah have been negative for the virus, Ms. George said on September 9. She had also said that the incubation period of the virus was 21 days from the date of first contact with the victim and therefore, everyone in the contact list was being monitored.