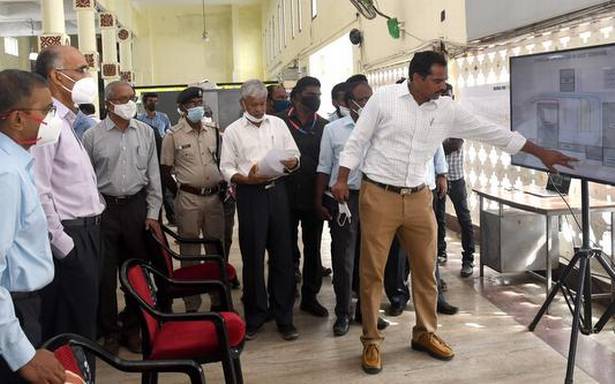 Madurai railway junction will get a major revamp with air concourses and expansion of all passenger amenities to take care of passengers for the next 40 years. This was explained to Southern Railway General Manager John Thomas in a brief PowerPoint presentation at the junction during his annual inspection on Monday.

Mr. Thomas said Madurai was one of the stations selected for redevelopment and the final touches for the plan were being given. The tenders would be floated by January and the work would start soon.

As part of the station redevelopment plan, two air concourses would be constructed on the lines of facilities at airports to segregate passengers arriving and departing to avoid congestion. Basic functions such as ticketing and enquiry would be taken care of on the ground level. The first floor and the ground floor would have waiting hall and cloak rooms. The concourse would also have commercial establishments.

Besides ramping up the multi-level two-wheeler parking facilities, multi-level car parking have also been planned. A pedestrian subway would be constructed to provide safe passage of passengers between Madurai junction and Periyar bus stand. The second floor would be kept ready for future expansion.

With regard to restoring all passenger trains, Southern Railway was adopting a wait-and-watch approach in the wake of threat of Omicron variant of COVID.