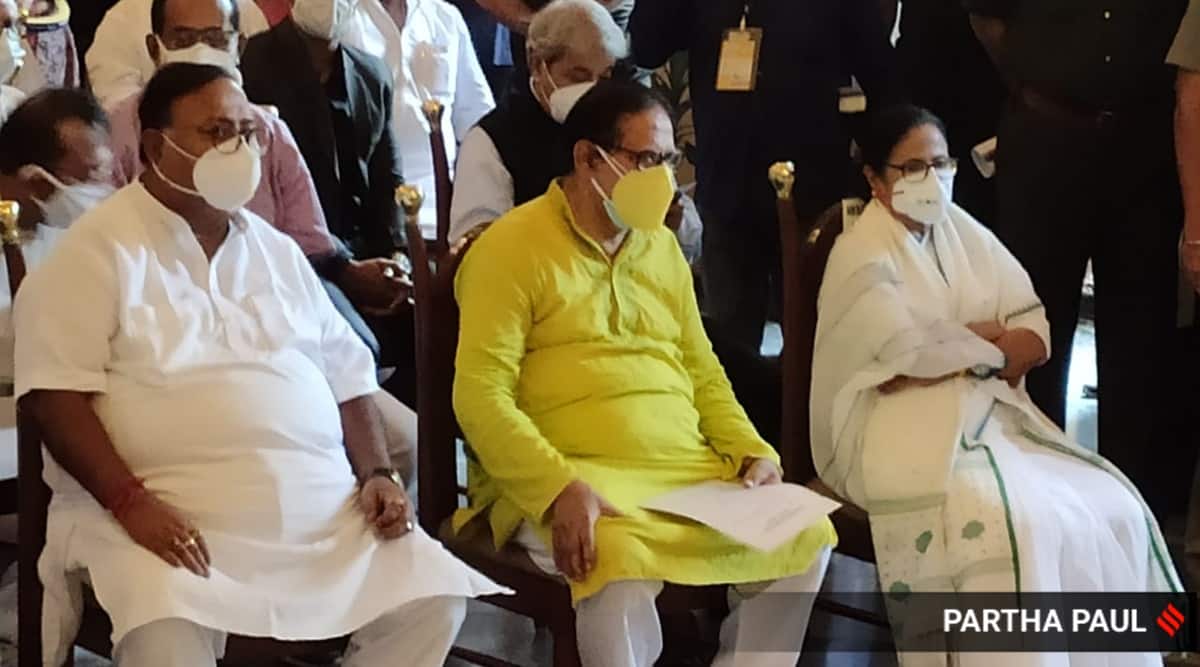 Mamata Banerjee Swearing-in Ceremony Live Updates: Trinamool Congress supremo Mamata Banerjee was sworn in as West Bengal chief minister for the third straight term today after she spearheaded her party to a remarkable victory in the assembly polls. The ceremony was a low-key programme given the ongoing COVID-19 pandemic, officials said.

Invitations for the programme were sent to her predecessor Buddhadeb Bhattacharjee, leader of Opposition of the outgoing House Abdul Mannan, and CPI(M) veteran leader Biman Bose, the official said on Tuesday.

The ceremony comes amid mounting pressure on the TMC government over the post-poll violence that claimed at least 14 lives in two days. Banerjee has asked the administration to control the violence at the earliest. On Tuesday, Prime Minister Narendra Modi called up Governor Jagdeep Dhankhar and the Union Home Ministry seeking a report from its state counterpart. BJP president J P Nadda also met families of the victims.

Mamata Banerjee, in her trademark white Sari and shawl, took oath in Bengali. The rest of the cabinet and the council of ministers will be sworn in on May 9, the birth anniversary of Rabindranath Tagore.

The TMC, meanwhile, alleged that its workers, too, have been attacked, and that reports of violence are an exaggeration. Senior leader Derek O’ Brien asked on Twitter, “Why would someone who won a landslide victory start riots in their own state? They won’t. But the losing side might want you to think they would.”

A senior TMC leader said, “There is a huge amount of propaganda that is doing the rounds in the state, including fake videos and photographs. There is violence, yes, but it is being controlled. But the BJP wants to turn this into a communal situation. This is the same model they used in Delhi after they got defeated. Look at the demands for President’s rule. Thousands are dying due to Covid. They have just found something to distract the country with.”

Calling upon Trinamool Congress chief Mamata Banerjee to play the role of the Chief Minister of the entire state and not just of her party, the BJP on Tuesday sought stringent moves to end the violence in West Bengal after a bitterly fought, highly polarised election campaign.

Sources said the central BJP leadership, worried that the violence could possibly force its cadre to switch ranks to the TMC, is trying to pull out all the stops — from Prime Minister Narendra Modi dialling West Bengal Governor Jagdeep Dhankar and expressing serious anguish to BJP president J P Nadda rushing to the state to meet families of workers killed and injured in the clashes. On Tuesday, the party also approached the Supreme Court seeking a CBI probe into the violence. Read more

TMC chief Mamata Banerjee arrives at the Raj Bhavan in Kolkata. She will take oath as the Chief Minister of the state for her third consecutive term, shortly.

Chief ministers of other states and leaders of other political parties have not been invited for the programme keeping in mind the current COVID-19 situation in the country, he said.

“It has been decided to keep the oath-taking ceremony of Mamata Banerjee a very simple one because of the COVID-19 pandemic. Banerjee will be the only leader who will be taking oath tomorrow. The programme will be a very brief one,” he said.

Trinamool Congress MP Abhishek Banerjee, poll strategist Prashant Kishor and party leader Firhad Hakim are likely to be present at the ceremony scheduled to be held at the Raj Bhavan at around 10.45 a m on May 5, TMC sources said.

BCCI president Sourav Ganguly has also been invited for the ceremony, the official said.

Soon after taking oath, Banerjee will go to the state secretariat ‘Nabanna’ where she will be given ‘guard of honour’ by Kolkata Police, sources said.