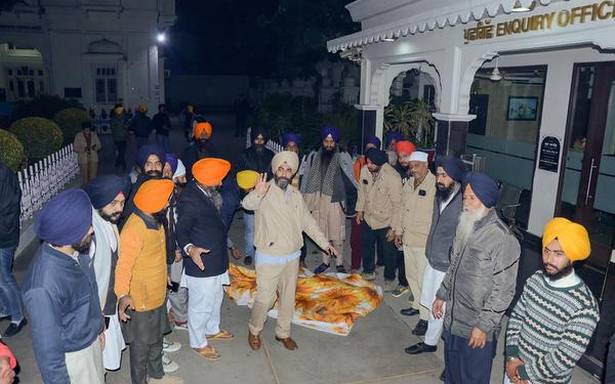 One person died after being beaten by devotees on Saturday when he entered the sanctum sanctorum of the Golden Temple in Amritsar, according to the Shiromani Gurdwara Parbandhak Committee (SGPC) – the apex body for the management of gurdwaras.

In an official statement, SGPC chief Harjinder Singh Dhami said an attempt was made by a man at “Sachkhand Sri Harmandar Sahib” (Golden Temple) to cross the safety grill while the recitation of daily ‘Rehras Sahib’ (evening prayer) was underway.

“During the recitation, a man jumped over the safety grill and entered the sanctum sanctorum and picked up the sword kept in front of Sri Guru Granth Sahib, but he was apprehended by the ‘Sewadars’ on duty, and he died due to beating by the sangat (devotees),” said Mr. Dhami.

Mr. Singh said that such unfortunate incidents had taken place at many other places also but the governments did not take it seriously.

“It is unfortunate that instead of exposing the forcing working behind the culprits who had been arrested in the past, they were released after being declared as mentally ill. It is the failure of the governments and agencies who could not reach the people working behind such culprits,” he added.

In a statement, Mr. Badal said that it is impossible to believe that this could be the act of just one person and there clearly is a deep-rooted conspiracy behind it.

Mr. Badal hit out at the State government, saying that there were strong indications of such a conspiracy being hatched. “Only the other day, there was a shocking incident of gutka packets being thrown in the holy lake [around the Golden Temple]. But no one did anything nor took any steps to prevent such a heinous crime from happening. What are the intelligence agencies doing,” he asked.