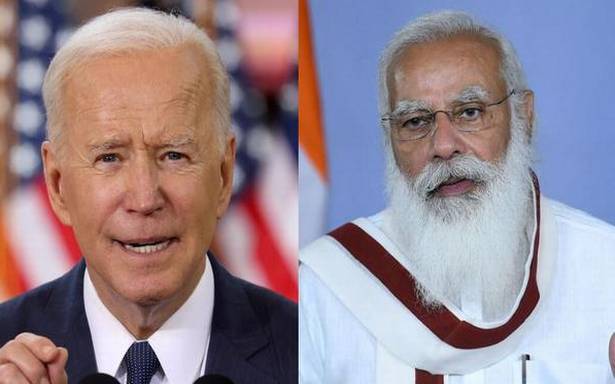 Prime Minister Narendra Modi will meet with U.S. President Joe Biden and attend the Quadrilateral (Quad) summit along with Australian Prime Minister Scott Morrison and Japanese Prime Minister Yoshihide Suga on Friday, but there is “no link” between his meetings and the newly announced Australia-UK-US (AUKUS) alliance, the government said on Tuesday.

In the first such comments indicating that New Delhi is distancing itself from the new partnership, Foreign Secretary Harsh Shringla said the Quad meeting will deal with issues like the COVID-19 pandemic, new and emerging technologies, climate change, infrastructure, maritime security, education, humanitarian assistance and disaster relief, while AUKUS is a “security alliance”.

“We are not party to this alliance. From our perspective, this is neither relevant to the Quad, nor will it have any impact on its functioning,” Mr. Shringla told journalists at a briefing on the Prime Minister’s visit.

Mr. Modi is expected to begin his visit to the U.S. on September 24, and will hold talks with Ms. Harris, the first American Vice-President of Indian origin, in their first face-to-face meeting. He will also meet a group of American business leaders and CEOs, as well as hold bilateral meetings with the Australian and Japanese heads of state. On the September 25, Mr. Modi will meet Mr. Biden and subsequently both leaders will attend the Quad summit. Mr. Modi is expected to fly to new York later that evening and address the UN General Assembly the next morning.

“The bilateral meeting will also feature the current regional security situation following recent developments in Afghanistan, and our stakes as a neighbour and a long standing and preferred development partner of the people of Afghanistan. In this context, we would undoubtedly discuss the need to see an end to radicalism, extremism, cross border terrorism and the dismantling of global terrorist networks. They will also discuss the reform of multilateral system including the UN Security Council,” Mr. Shringla said.

Mr. Shringla said that in particular, the focus would be on how to operationalise the four foundational defence agreements that India and the U.S. have now signed as part of their defence partnership to encourage more co-production and co-innovation projects.

To a question on the India-U.S. civil nuclear partnership, which has not yet led to a commercial agreement being signed more than six years after Prime Minister Modi and former U.S. President Obama announced the deal was “done” in 2015, the Foreign secretary said that while the Nuclear Power Corporation of India Ltd (NPCIL) and U.S. company Westinghouse Ltd were in discussions, issues over the question of “liability” still need to be addressed.

When asked if the Mr Modi’s meetings and the Quad summit would be impacted or overshadowed by the big U.S.-Australian defence partnership, Mr. Shringla said the two events were not linked and also denied that the new partnership would mean that the Quad would only deal with “softer issues”

“There is no link between AUKUS and Quad. AUKUS is a security alliance, Quad is a different group of countries working on a different vision…of the Indo Pacific as a free, open, transparent, inclusive region. And in the same sentiment Malabar exercises (maritime exercises involving Australia, India, Japan, U.S.) are those that are done between different nations but has nothing to do with Quad,” Mr. Shringla said.

He also said India had noted Australia’s clarification that the AUKUS partnership for nuclear propelled submarines only dealt with nuclear power technology, and hence is not a case of “nuclear proliferation”.