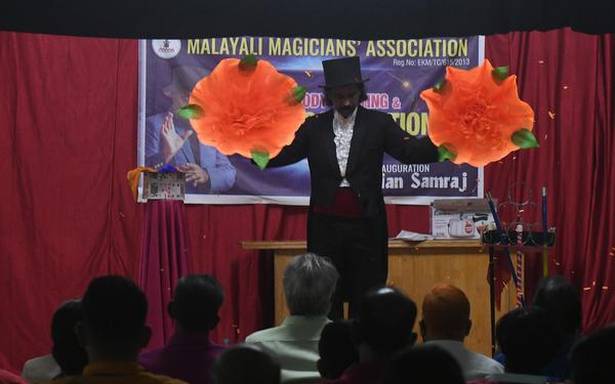 The COVID-19 pandemic has derailed the lives of magicians, just like other artistes, who are struggling to find a means of livelihood in the face of a ban on large gatherings.

“We can create an illusion of hundreds of currency notes on stage, but back home, we are struggling to make both ends meet,” said illusionist Samraj, one of the best known professional magicians in Kerala.

He said dozens of magicians had ended their lives during the pandemic, unable to find a means of livelihood. “The condition of magicians is pathetic, and many are facing severe mental stress,” he said on Sunday on the sidelines of the ninth annual convention of Malayali Magicians’ Association here. The association has around 400 members, while it is estimated that there are over 4,000 magicians in the State, who earn a living through stage shows and public performances, said Joseph Seba, Alappuzha district secretary of the Association.

He added that magicians led a poor life earning a living through daily performances. Most of them are unable to do any other work because do not have the skills. He cited his own example where one of his helpers on stage had begun a small business and failed miserably in the wake of the pandemic.

Mr. Samraj said while a small group of artistes had gained from the pandemic curbs, a vast majority of them had been confined to their homes, struggling to meet their day-to-day needs. Efforts to draw government attention to the plight of magicians had failed, he added, pointing out that a group of around 2,000 artistes from all fields had put up a performance in front of the State secretariat to draw the attention of the government to their situation.

Magicians find a livelihood performing at celebrations, including parties and temple festivals. But COVID restrictions now require them to get clearance from the district authorities and the police, said Sham Valathungal, a magician from Kollam.

Mr. Seba pointed out how magicians were finding opportunities to perform on cruise boats, but the situation had changed with tourism itself being hit by the pandemic.

He said around 30% of magicians depend solely on performances for a living. Many of them have now taken up various other activities, including selling fish and painting buildings, to maintain their families. Magicians like him are appealing to the government to allow them to perform in public in keeping with the pandemic protocol. “We are not seeking any government help, but allow us to perform in public spaces,” he added.