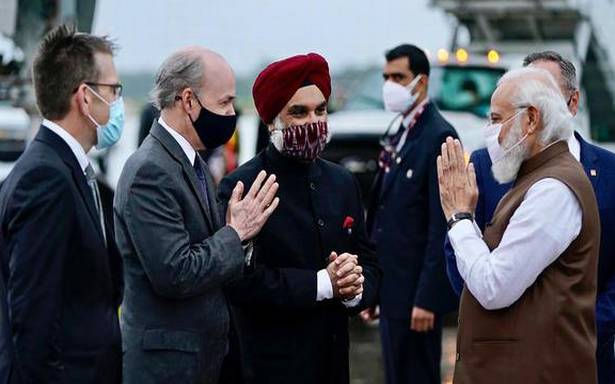 The remarks by India’s Ambassador to the U.S. came at a dinner event hosted by Indiaspora on September 29.

,Prime Minister Narendra Modi had a very successful visit to the United States during which he held his maiden bilateral meeting with President Joe Biden and had a good candid and substantial exchange with like-minded Quad leaders at their first in-person summit, India’s envoy here has said.

The remarks by India’s Ambassador to the U.S., Taranjit Singh Sandhu, came at a dinner event hosted by Indiaspora on Wednesday, September 29, 2021.

The dinner was attended by the who’s who of the Indian-American community.

Eminent members of the Indian-American community had gathered for the first time in the national capital after the COVID-19 pandemic hit the country.

During the visit, there was an important bilateral meeting between President Biden and Prime Minister Modi, the first one since the Biden-Harris administration was inaugurated in January this year.

The two leaders had earlier met in 2014 and 2016 when Biden was the Vice President of the country.

“So, it was not the first time they were meeting, but the bilateral meeting was very good,” Sandhu said in his first public appearance after last week’s visit of Prime Minister Modi.

The Quad summit hosted by Mr. Biden at the White House and attended by Mr. Modi along with their counterparts from Japan and Australia “really went off very well,” he said.

“There was a good candid and substantial exchange between all the four leaders," he said, adding that there are practical areas in which the corporation is moving quite ahead.

“In fact, in vaccines, all the four countries are bringing their respective strengths together and we are on our way to producing one billion vaccines in 2022 which will be distributed over the Indo-Pacific particularly in Southeast Asia,” Mr. Sandhu said.

During his trips, the U.S. handed over 150 historic antiquities to India, which the Prime Minister took with him on his return to India.

From Washington DC, the Prime Minister went to New York where he addressed the UN General Assembly.

Quickly running through some of the important areas during the trip in addition to the strategic ones, Sandhu said the Prime Minister had a good exchange on regional issues as well as other international challenges.

“Quad is a group of like-minded countries which are coming together because today’s challenges are much international in nature. For example, COVID,” he said.

The U.S., India, Australia and Japan had in 2017 given shape to the long-pending proposal of setting up the "Quad" or the Quadrilateral coalition to counter China’s aggressive behaviour in the Indo-Pacific region.

In affordable health care, he said, India is an important partner.

“There is tremendous scope for us, bilaterally to help each other and also to third countries,” he said.

As India resumes its export of vaccines, he noted there would be close cooperation with the United States and other like-minded countries Digital, IT, startups and innovation holds a lot of promise in the bilateral relationship with the US. Climate change, environment and knowledge and education are other major areas of cooperation between the two countries.