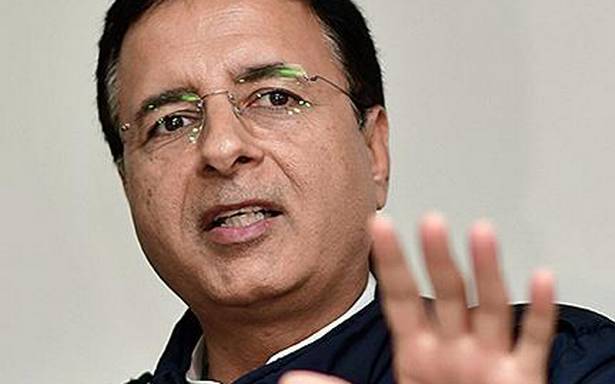 After the Supreme Court rapped the Centre over its failure to resolve the deadlock with farmers over the new farm laws, the Congress on Monday asked Prime Minister Narendra Modi apologise to the farmers and repeal the three laws.

The Congress also said it “respected” the Supreme Court’s concern for the farmers but maintained that the issue cannot be resolved through a legalistic route but by Parliament.

"Prime Minister Narendra Modi should apologise not only to the families of 65 farmers who have sacrificed themselves, but also to the 62 crore farmers of the country. The Prime Minister should thereafter talk to the agitating farmers himself and nothing short of it is acceptable to the annadatas (food providers),” Mr. Surjewala told reporters.

“The Supreme Court is the protector of laws and the Constitution and we all have faith in it. If someone opposes the laws in a Gandhian manner, then the court will also support such an opposition, as protesting peacefully is a basic right enshrined in the Constitution,” he added.

However, commenting on the possibility of a court-appointed Committee to break the deadlock, Mr Surjewala said, “We respect the Hon’ble Supreme Court and its concern for the welfare of the farmers that it has expressed, but, ultimately repeal of the laws and the discretion to repeal the laws, which an autocratic Prime Minister and his Government have made in order to help his crony capitalist friends lies at the doorstep of the Government and not the Supreme Court.”

Communist Party of India general secretary D Raja said, “Though the final orders are yet to come, the Supreme Court’s comments are an indictment of the government. Good sense should prevail and the Centre should repeal the three laws.”