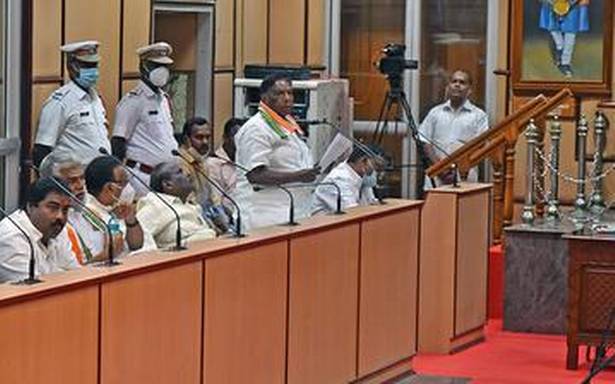 After the fall of the Congress government of V. Narayanasamy on Monday, the Union Territory appears headed for President’s rule as the Opposition parties are not keen on forming a government with the election just two months away.

Before his government lost the trust vote, Mr. Narayanasamy used the floor of the Assembly for one final assault on the BJP government at the Centre, which he said had engineered resignations from the Congress to topple a democratically elected government virtually on the doorstep of elections.

Mr. Narayanasamy said the Opposition, too, had to answer the electorate for winking at such anti-democratic measures and explain whether they approved of the manner in which the Union government, through former Lt. Governor Kiran Bedi, had obstructed the implementation of welfare schemes. With the issue likely to be a rallying theme for the Congress-led Secular Democratic Progressive Alliance during electioneering (it could even find resonance in Tamil Nadu), the Opposition’s line of thinking could be that it would rather not play into this image trap by forming a government at this juncture. Also, since the election notification is a few days away, a new government would not be able to announce or implement any scheme once the model code of conduct is in force.

In fact, the Opposition has been seeking to project the desertions from the Congress as a case of internal strife, with party leaders unwilling to face the election with very little to show for.

While Leader of the Opposition and former Chief Minister N. Rangasamy was non-committal on whether he would stake a claim, the AIADMK and the BJP, both allies of the AINRC, said the local units would await advice from their leadership. “We will not try and form a government at this stage,” BJP president V. Saminathan said.

He was optimistic that the BJP and its allies would come to power in May and “build a bright future for the people of Puducherry”.

In case of the Opposition not staking a claim for government formation, Puducherry will go for another round of President’s rule, hardly a new phenomenon, given the past phases of political uncertainty from defections, poaching and resignations.

In the history of the Union Territory, more than 10 governments had fallen without completing their tenure either owing to defections, infighting and withdrawal of support by allies.

Political history reveals that the same person had occupied the Chief Minister’s chair, contesting on a different party ticket. M.O.H. Farook held the post as DMK and Congress nominee. Except for V. Vaithilingam and N. Rangasamy, no other Chief Minister could complete a full tenure because of political instability.

“In fact, the ‘Aya Ram Gaya Ram’ concept was very much prevalent in Puducherry when the issue of horse trading created national attention. We have more political turncoats than in other States. This trend will continue till people become more aware of the reasons for politicians to switch sides very often…,” a political observer said.