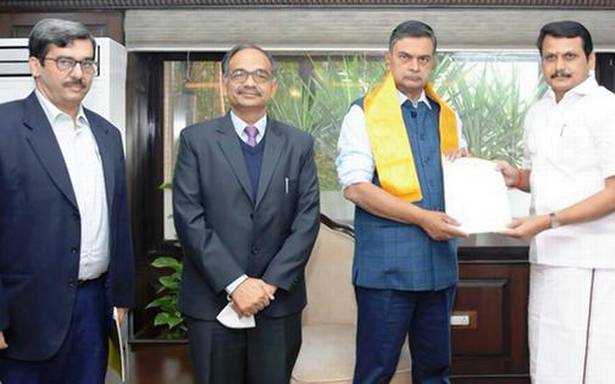 “Therefore, restricting the purchase from open market to meet the demand will force the State to restrict the supply which will eventually hit the grid stability as well as the development of various sectors,” he contended. During the meeting, Mr. Balaji also flagged issues pertaining to coal. Since the fuel supply agreement was for 23.763 MTPA and realization was 17.11 MTPA, which was only 72%, the Minister sought entire quantum of FSA and additional quantum to compensate balance requirement.

“M/s. MCL is requested to spare the linkage quantity of about 10,000 tonnes per day for transfer to the needy IPPs for purchase of power by Tangedco under the case 4 methodology stipulated by the Union Ministry of Power."

Referring to the Union Ministry of Coal’s show cause notice as to why the 5% of performance security given by the Tangedco not be appropriated for not having developed the Chandrabila coal block as per the agreed time schedule, he pointed out that the development of the coal block was affected due to non-issuance of clearance for exploration in the forest area by MoEF & CC.

“Hence, Tangedco requested the Ministry of Coal not to appropriate the performance security provided by it as the non-adherence to the agreed time schedule is due to reasons beyond its control. It sought revised time schedule for the project,” he said.

Considering the inflation, change in technology and the long-term impact of this trade margin and also considering the service provided by M/s SECI, the collection of service charges at 7 paise per unit (which works out to nearly 2.5% to 3% of the tariff) needs to be reconsidered and reduced to 1 paise/unit to encourage renewable energy penetration, the Minister said.

Interest reduction on borrowings from the Centre government financial institutions, R-APDRP part B conversion of loan to grant, revamped distribution sector scheme and declaration of Raigarh-Pugalur HVDC transmission corridor as strategic and national importance, expediting the allocation of 1,500 MW through PTC (MTOA), TEDA Central financial assistance pending with MNRE were among the other issues flagged by the Minister.