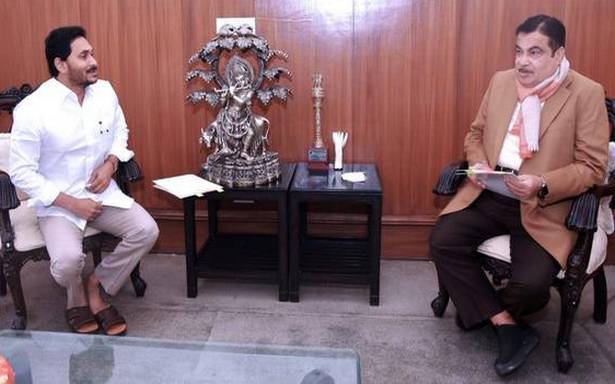 It will help reduce distance to Odisha and Chhattisgarh, Jagan tells Gadkari

Chief Minister Y.S. Jagan Mohan Reddy has urged Union Minister of Road Transport and Highways Nitin Gadkari to expedite the preparation of the Detailed Project Report (DPR) for the national highway proposed from the Visakhapatnam Port to Bhogapuram via Rushikonda and Bhimili.

During his meeting with Mr. Gadkari in New Delhi on Tuesday, Mr. Jagan Mohan Reddy said the highway would help reduce the distance between the port and Odisha and Chhattisgarh. The highway would also be close to the beach corridor projects along the coast, he added.

Seeking that the highway be a six-lane one considering the traffic congestion in Visakhapatnam, Mr. Jagan Mohan Reddy said it would also contribute to the development of tourism in the region, besides helping in reaching the proposed Bhogapuram International Airport easily.

The Chief Minister also urged Mr. Gadkari to consider the State government’s proposal mooted earlier for a bypass road to the east of Vijayawada. He said land acquisition for the purpose would be completed as soon as possible. He said the State government would extend exemption to the project from SGST and royalty to reduce its cost.

The Chief Minister also sought extension of the four-lane road in Bapatla as a part of the construction of the NH-216 on the Kathipudi – Ongole corridor as there was a possibility of traffic jams on the stretch due to the presence of educational institutions, tourist flow and an air base.